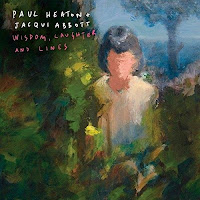 Wisdom, Laughter And Lines is the second album since Paul Heaton reunited with his old sparring partner Jacqui Abbott from their days in The Beautiful South. After the slightly unexpected success of What Have We Become, Wisdom, Laughter And Lines is everything you'd expect from a Heaton-composed album, intelligent articulate and observational lyrics on a range of subject matters close to his heart combined with an unerring knack of delivering a tune that's both simple in execution but also an impossible to shift ear worm. It's a perfect title for the album too as the songs tell stories about life and love and politics, all shaded by Heaton's dark battered and bruised take on the world.

Heaton's in reflective and slightly morose mood on Wisdom, Laughter And Lines. The album starts with the declaration that (Man Is) The Biggest Bitch Of All, a reflection that men's infidelity is something hard-wired and impossible for a woman to avoid. It sets the tone, there's continued reference to the failure of relationships viewed from the point of someone who's been there and seen it all, either personally or through observation.

So often though, it's tempered by the saccharine of the music, either upbeat in contrast and contradiction to the subject matter. Heaton and his partner in crime Johnny Lexus have managed to hit the spot again time and time with just the right harmony and melody to grab the listener's attention and not let go. There's something addictive and warming in the likes of first single Austerity Of Love or the way strings are used in I Don't See Them and Sundial In The Shade to create a counterpoint.

The aforementioned Sundial In The Shade is a heart-wrenching tale of the consequences of domestic violence, a woman repeating the tale of her own mother twenty years earlier who takes so much before reacting and ending up in prison and taking her own life. It's tempered though by an epic build into a line you could imagine thousands singing back, even despite the context, "what I want from life is not a roller coaster dip, what i want from love is not a ramp up to a skip"

It wouldn't be a Paul Heaton record without some of the cutting social and political commentary he's famed for both in his music as well as in his on line presence and championing of trade unions and social justice. "Fuck the king and fuck the queen with an AK47" at the start of Heatongrad heralds a stark change in mood and subject matter. It envisages a world run by Heaton's rules and contrasts it with the one where Tonygrad sends young men to Iraq to die and millionaires get to pay no tax. You can draw a straight line from The Housemartins' political slant straight to this, now far more direct and specific than back then, but still with the fire in his heart and belly to call out injustice. Lonesome And Sad Millionaire takes another slant on it, highlighting that money doesn't buy you happiness and can actually do the exact opposite.

The album goes off on a bit of a diversion with The Queen Of Soho and Horse And Groom, detailed tales of observation of characters and situations as is Heaton's wont, the latter wouldn't sound out of place on a Smiths' album, either from Lexus's riff or the nature of the descriptive lyrics.

When Love For Woman Stops takes the mood back down, dwelling on the moment when a relationship changes from love to something more routine set to a delicious string arrangement that is possibly even more impactful in setting the pathos of the song than the words themselves. Wives 1, 2 and 3 tells the tale of a man on his fourth wife and treating her as if she'll soon be added to the list that makes up the title of the song.

It isn't all about Heaton though. It's no coincidence that his renaissance has coincided with the return of Abbott. When the two of them sing together, they work together in perfect unison and when Jacqui takes the lead, as she does on No One Wants To Stay or as the fourth wife in Wives 1, 2 and 3, she isn't just playing second fiddle, the voice melts even the coldest heart.

The album does finish on a positive note (ignoring the bonus tracks on the deluxe version which we're not yet privy to) when Jacqui sings about love appearing when you don't expect it later in life, finding wisdom, laughter and lines amongst endless glasses of wine and despite losing what you have that love winning through, as if everything else that's been gone through to get to this point on the album has been part of a journey. Optimism sneaks through and wins out in the end.

Wisdom, Laughter And Lines is certain to cement the love that's felt for Heaton and Abbott. Despite the often dark and sometimes disturbing subject matter, it either grabs the listener with that unmistakable tone of Paul's voice or the beauty of Jacqui's or by the music that sits in direct opposition to the words it accompanies. No one else manages to quite achieve this.