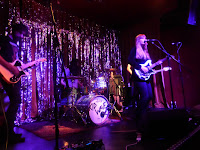 It's been a big year for Kid Wave with the release of their debut album Wonderlust and they're topping it off with a big UK headline tour after a number of prestigious support slots. We caught up them at Gullivers in Manchester and witnessed a band spreading its wings and taking the songs to a new level.

What Kid Wave do so well is hint at and remind us of sixties surf rock in parts but with a modern twist to it. There's big soaring guitar riffs, often twisted with Mattias' judicious use of his pedal board, that give their live sound a harder edge than the recorded versions of Wonderlust. Their constant touring has also reaped dividends as they've learnt to channel their raw power and mix these to more consistent impact than when we first saw them at the start of the year and they can move effortlessly and seamlessly from Baby Tiger to Honey at the start without drawing breath and they do this a number of times later too. 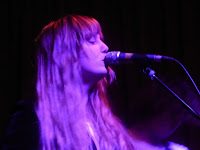 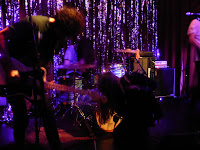 It's not all full on rock and roll though as they understand the importance of hooks and melodies and the way they use backing vocals is critical to this, but not their only tool. At times all four of them are singing, with a great contrast between female and male vocals when they do, and this lifts them and allows them to duel with the wall of guitars and drums on equal terms.

Penultimate song Walk On Fire is a huge anthemic beast of a song that builds slowly and then lets go at just the right moment, whilst I'm Trying To Break Your Heart, although with rougher jagged edges than the album version, still has all the marks of a great crossover grunge pop single stamped on it whilst Gloom, the chiming hook line of Sway and the ludicrously catchy Best Friend remind us why we all noticed them in the first place.

They don't say a great deal, but they don't need to as they let the music do their talking for them. As set closer Wonderlust explodes off into an extended ending, they all turn and face Serra and wreak every last notch of volume out of their guitars whilst she expires every last drop of energy in a ferocious climax to the set.

They finish their tour at Glasgow Broadcast (2), Leeds Brudenell Social (3) and London The Lexington (5) and they hinted at yet more dates including a return to Manchester by the end of the year.