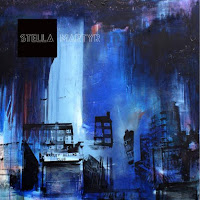 Neon Traces is Exeter Stella Martyr's debut EP, five songs that combine a love of 1980s Factory electronics with a more modern feel and approach and guitars.
Opening track Jungfrau is interestingly lyrically. It refers to the Jungfrau mountain in the Alps, one of the highest peaks in Europe, with references to the iron tunnel on the train line, the icy summit, glaciers and heavy clouds. It's extremely descriptive and there's similar attention to detail in the music with everything crisp, clear and uncluttered. It's hardly surprising with celebrated conductor and arranger Joe Duddell in the line-up that everything gets heard in the mix and each member of the band's contribution is recognised as a result.

Concrete Kisses is the most immediate track, bold opening keyboard and guitar sections underpinned with a pulsating drum beat before lifting itself into a chorus that reflects "I wish I'd found a way to talk to you, not involving the use of words. Of course I know I'm easy to see through but sometimes speech just goes unheard" before stepping back down. Running Rabbits starts with a sample in German before being led by a shimmering electronic beat through a spoken verse and a half-spoken half-sung chorus. It's not as immediate as what's gone before but it's a trait of Neon Traces that it doesn't try to bulldoze itself into your affections, it adopts a much more subtle approach, feeling warm and familiar but never sounding like a carbon copy of anything maintaining its own personality and holding your attention throughout.

The simple repetitive rippling keyboard line of Immortals grabs you and doesn't let go. Lyrically a little darker "mirrors shatter, spirit scatter, minds exposed" than what's gone before, the use of female backing vocals offers a softer contrast. But the real treat is saved for the end. Sugar clocks in at over six minutes but never once outstays its welcome. Strings linger over the opening, it builds slowly, softly and gently, creating a tension, building, brooding, uncluttered, softened by those backing vocals.

Neon Traces feels like a set of songs produced by a group of mates with something to say but also making the music for fun rather than to get rich and famous. As a result, it nods to what they love, talks of what matters to them but retains their own creative spirit and stamp across it. It's an EP that you get more out of the longer you listen to it, the more you immerse yourself in it, like all great records and which passes so many people by these days.

Stella Martyr's official website can be found here and they are on Facebook and Twitter.  The EP can be pre-ordered from their web shop.
Posted by Even The Stars at 08:00