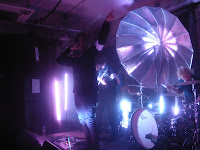 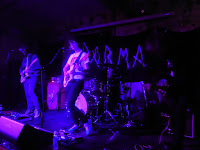 There's a Kent double act as Broken Hands and Get Inuit start their UK tour at Manchester's Soup Kitchen. Broken Hands are bringing their take on what could be described as psychedelic metal to Manchester in support of their recent album Turbulence.

Get Inuit are on tour in support of their recent EP and two of their stand out tracks in the set come from that record - I Am Hot Air and Pro Procrastinator.  They're at the best when they're taking the hand off the throttle and letting loose rather than the odd part where they are trying to be artistic, but that's only a minor quibble. Their bass player doesn't stay still the whole set, hair flying every where whilst front man Jamie isn't your archetypal band figurehead as he seems much happier during the songs than talking between them but intriguing all the same.

Their best song is one that we think is called Stick In The Mud. It's fast and frenetic without losing any sense of rhythm and purpose whilst maintaining their slightly off-kilter edge. They're not the finished article yet by any means, not surprising as they've only just started releasing records, but they're definitely a band to keep an eye out for. 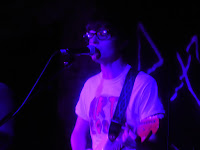 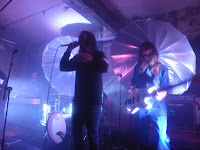 Broken Hands have been around a couple of years, but it's only earlier this month that they released their debut album Turbulence. They come to Manchester with a big stage set up, two huge umbrella style objects that act as a foil for the lighting bank they have at the side of the stage and the smaller kit at the front. It feels like they've got the vision for a bigger stage and it's immediately obvious their sound is too. It's a big, bold brash translation of Turbulence into a live set, much harder, much more resilient than the recorded versions.

As the album is, Dale tells us, a form of concept album about taking off, landing and fear of crashing a plane, it takes us on a journey, but there's only one point mid-set during 747 where it veers off course for a couple of minutes before rejoining the flight path. He's an animated front man, it feels like he's hemmed in by the constraints of the cramped Soup Kitchen stage and wants to be in amongst us. He excitedly tells us about the songs and thanks us endlessly for coming out to see them. As they finish on a crescendo of noise with the title track from the album the rapturous applause tells them that the thank yous are more than reciprocated.

Broken Hands are a band made for bigger stages than this. Their live show is a fascinating mix of psyche and metal enhanced by the lights and it's loud, real rock and roll, not some diluted down version that's aiming to sell records or get radio play right from the start of set opener Spectrum and not easing off. They do what many bands bigger and more celebrated are claiming to do but without the bravado.

Email ThisBlogThis!Share to TwitterShare to FacebookShare to Pinterest
Labels: Broken Hands, Get Inuit