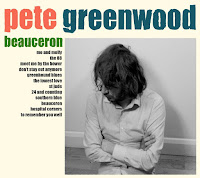 It's been seven years since Pete Greenwood's debut album Sirens was released on Heavenly Records and you'd be forgiven for thinking he'd given up the music business. However he's back with a self-released album Beauceron and it's a record of simple understated beauty.

The album starts with two familiar tracks. Me And Molly was previewed as a lead track a few months ago and is how we cottoned on to Pete's return. It's a thoughtfully considered song with a slight hint of country especially as it breaks into a long instrumental outro section, which is a recurring theme throughout, and Pete's voice has mellowed slightly from Sirens. The 88 is a couple of years old and was championed by Noel Gallagher at the time it was released as a double A side Record Store Day single with Doves and it's not surprising that Noel fell for the delightfully classic feel to the song that makes it difficult to carbon date anywhere between now and the 1960s.

Meet Me By The Bower is more musically complex and allows Pete to show off his finger picking guitar style to dictate the pace and mood of the song as well as a voice that's tone is set perfectly for the optimistic "meet me and I'll be waiting and you'll get yours when I get mine" mood. Pete's voice is used as an instrument to mould the song's direction on Don't Stay Out Anymore as well until the guitar picks up and lifts it. As so much before it, and after, its magic is in the fact it's based around Pete's take on the traditional craft of song-writing with his own twist on it. "Is no one in love any more, does no one make plans anymore" he asks with a slight sense of resignation.

He brings in backing vocals and intensifies the presence of the guitar on Greenhouse Blues so that the album can revel in its own diversity even with its meagre means of creation. The Lowest Love and St Jude bring in what sounds like pedal steel and strings as well although they are utilised under the premise that less is more, their subtlety enhancing their impact and that of Pete's voice rather than subduing it. That theme then continues through the rest of the album as the songs feel more like they are him conversing with friends set to music - the story of growing up and the effect of "the patron saint of falling on the floor" on 24 And Counting.

The title track is a little fuller of body with an electric guitar sound to it along with drums and a chorus backing vocal as he laments "there's no one in there where the love goes" but the style on the final two tracks Hospital Corners and To Remember You Well changes to usher back in the finger picking style and the songs feel more intense, almost claustrophobic as the guitar wraps itself around Pete's voice.

Beauceron isn't music to listen to on go as you won't capture everything with noise all around you. It demands your attention to fully appreciate how its simplicity, intelligence, natural feel and clever subtlety in parts actually creates the intimate mood of the record. It feels as a whole like a deeply personal statement, a big two fingers to an industry that treated him shoddily so he's done this under his own steam, by his own rules and in his own time. Along with The Lake Poets album, it should be at the forefront of the singer-songwriter field as it's a reflection of its creator's personality and story rather than an attempt to recreate someone else's glories.

Pete plays an album launch at the Monarch in Camden, London on October 21st then at The Pindrop in Hartlepool on November 6th.