Track Of The Day 2 : The Pains Of Being Pure At Heart - Laid 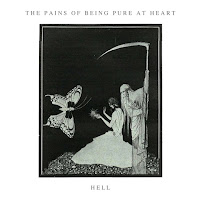 We're not usually fans of cover versions and Palma Violets' recent attempt at this song almost incited us to violence, but The Pains Of Being Pure At Heart have created this wonderful take on the title track from James' 1993 Laid album featuring Jen Goma of A Sunny Day In Glasgow on lead vocals.

The beauty of the cover is that they've managed to stay relatively faithful to the original without copying it too closely, yet have also put their own spin on it. Aside from Jen's vocals, they've retained that signature drum beat but the rest of it takes a more melodic approach than the James original.

The track is from their forthcoming EP Hell, which features an original of theirs as the title track as well as a cover of Felt's Ballad Of The Band.  Hell represents their first new material since last year's third album Days Of Abandon.

Email ThisBlogThis!Share to TwitterShare to FacebookShare to Pinterest
Labels: James, The Pains Of Being Pure At Heart