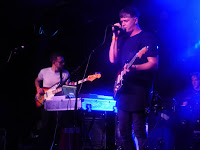 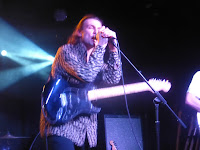 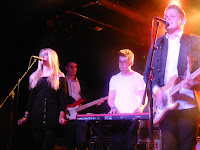 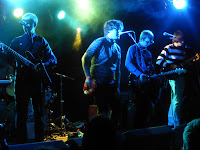 Four very different bands make up the line-up of Scruff Of The Neck's latest showcase of the North West's best emerging talent at Manchester Academy 3. Headliners Delamere are launching their new single Heart, whilst Vynce, James Christy Band and Control Of The Going seek to make the most of the opportunity of the big stage to showcase their talents and win over new fans.

This is by far the biggest gig of Control Of The Going's fledgling life as a band, but it's also the night they make a significant step up. Most of the crowd have got down early for them as word spreads with every gig. They're assisted by a superb sound set up as well which allows the nuances that often get lost in the mix with a six-piece to be heard and it's in those details where Control Of The Going excel and stand out from their contemporaries.

Icy atmospherics, chiming guitars, subtle keyboards and drums that dictate changes of pace in the songs provide the thrilling backdrop for Liam's voice, which might not be to everyone's taste but is distinctive and perfect for the mood of the songs. He's also more animated than we've seen him before finishing War Crime by smashing his tambourine repeatedly on the floor, lost in a world of his own.

The six song set features songs from both their EPs to date - Epilepsy Bus Ride and Wild Flower - as well as some new additions to the set and whilst the more familiar songs such as If Only, The Message and Wild Flower are forever evolving, it's the two newer songs - War Crime and Control - that really hit home that they're developing into something quite special and prolific. 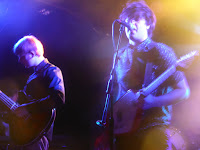 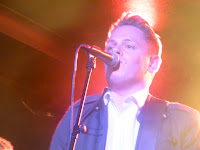 The James Christy Band are up next and a complete contrast to Control Of The Going sonically. They trade in high octane pop with a classic soul edge to it. James is a confident front man with a voice to back it up and the band he's assembled deliver tight rhythms that make it impossible not to stamp your feet or dance to it. The best moments are when his voice combines with the female backing singer and the whole sound is uplifted.

The original songs they play have a very classic feel to them, artfully and meticulously constructed with an understanding of what makes a great song that's accessible to a wider audience of all ages. In fact, the only moment things go slightly awry is when they cover Duffy's Mercy, an ambitious choice, and don't do it justice.  It's a minor quibble though and despite probably being the wildcard on the bill in terms of style they get a great reception at the end of the set.

Vynce are a different prospect entirely. We'd only heard the superb new song Lust before tonight, but we're impressed right from the start. Tracks like She's Not My Girlfriend and the aforementioned Lust which closes the set showcase a fast, frenetic sound, quite lo-fi in construction but not in impact.

It's guitar music with a hint of funk that you can dance to and the Merseyside based four piece have a set full of songs that grab you instantly and have a familiar feel to them without losing their own unique identity. Like so many bands from that city, they have an almost inbred sense of what makes a great song, but they use that to influence what they're producing rather than aping it. For a band we knew almost nothing about before the show, we're mightily impressed. 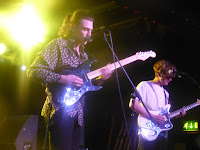 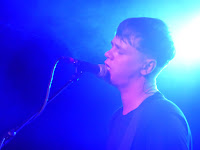 Delamere make a statement of intent in their first song, a long building introduction, ferocious drumming that dictates the pace and sweeping heartfelt lyrics and an impassioned delivery that makes them perfectly cut out for a room this size. They're not afraid or embarrassed to aim high and sound big and they succeed on both counts. Previous single Do You Want Me was a sign of their ambition that current single Heart has backed up and some of the newer songs they play tonight suggest that the step up they're making to bigger venues in Manchester and headline slots around the country is something they're going to take in their stride. Rain, a song they tell us they've only played properly once in soundcheck, sounds like their next single in waiting and bodes well for the album they hope to release next year.

Unlike so many bands they don't appear to take themselves too seriously either, they look like they're having fun up there and this transmits through their music to the audience as well. They pull a rabbit out of the hat as well with a superb cover of Luther Vandross's Never Too Much which they translate into something approaching a Eurodisco stomp - we're not usually big fans of covers, but we're hugely impressed.  Delamere are definitely a band on the up.

Control Of The Going are on Facebook, Twitter and Soundcloud. The EP is available from their Bandcamp page.