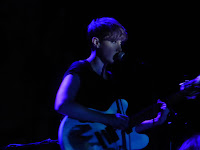 Since we first featured She Drew The Gun's debut single If You Could See back in January, things have started to happen for Louisa and her band. Second single Since You Were Not Mine won her a whole legion of new fans and with Steve Lamacq debuting new song Where I End And You Begin and them securing a huge support slot on Fink's European tour, the future looks promising. We caught their opening set at Manchester Academy 2 on Saturday night.

Last time we caught She Drew The Gun they suffered no end of technical difficulties, but the Academy 2 poses no such problems and what's immediately evident is how their live set has blossomed in such a short period of time and that this big stage holds no fears and the sound fills the room perfectly.

New single Where I End And You Begin is introduced as a song about getting drunk, Louisa joking that it's an "ode to myself." It has a beautifully melodic classic feel to it, even more so than Since You Were Not Mine that precedes it in the set. A little darker live than the single version as it's stripped down to guitar and bass, it doesn't detract from the impact that Louisa's vocals have on the listener, evocative, with intonation emphasizing the intent of the words. 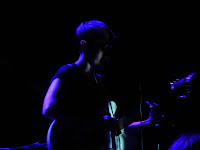 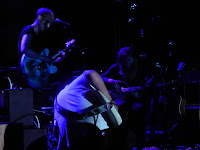 She Drew The Gun's singles so far wouldn't have you expecting them to be a band at the forefront of political commentary.  However, Broadcast is a damning indictment of current society more direct and relevant than anything we've heard about the current government's austerity with lines such as "it's time for something to believe in, am I the only one who's grieving, it's things that belong to you and me that they're thieving" and "the markets are demanding that we give away for free, everything our grandparents fought for to some company" capturing the real essence of what's going on in the country at the moment. Similarly, set closer Pit Pony is another song about Louisa's anger at the state of the world. It's less direct, but no less impactful. The crowd get it too, impressive given the response big venue support slots often get.

There's an intrigue around She Drew The Gun. They're signed to Skeleton Key, always a good sign for a new band given their impressive roster, but they're quite different to anyone out there at the moment. There's an understanding and love of traditional songwriting flowing through so much of what they do, but there's also a voice in there angry at the injustices of the world that creates a juxtaposition. Their journey is destined to be a interesting one and it feels like it's only just beginning.