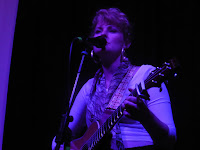 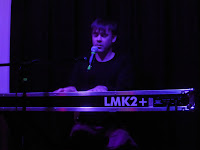 Canadian Jenn Grant has been released five albums to date, but it's only with her latest release Compostela that she's ventured to the UK and toured. Tonight is her second show in Manchester in the intimate surroundings of Gullivers' Lounge and she charms us with her beautiful delicate acoustic songs and her infectious between song talk. Support was from local composer David O'Dowda.


Accompanied by double bass and trumpet and one song on an Mac-enhanced backing track David O'Dowda's haunting songs are a perfect opening for the evening. He plays songs from his new EP The World Retreats - the title track as well as The Trouble - as well as others from across his career. The simplicity of them is what grabs us; the keyboard is often sparse in its impact as is his delicate soft vocal, but that's what makes them so affecting. He has accompaniment on double bass that is often used as soft percussion rather than its traditional sound and the trumpet is used to create a wishful longing feeling rather than blowing us away.

The audience are rightly extremely respectful in the tiny seated room and the songs need it such is the fragile nature of all but one of them. Every note feels considered, every instrument there to add to the mood and intent of the songs and there for a reason with no filler and every word hangs deliciously in the air. The penultimate song Look At Me is written about his young son and emphasizes the paternal love he feels in its soft, understated tones. In such hushed surroundings the outpouring of feelings is accentuated and tops off a great seven-song set. 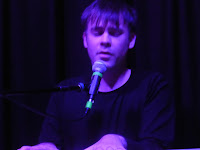 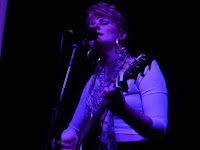 "Welcome to the cutest show ever" is Jenn's opening line to us and whilst she's referring to the fabulous setting, it could equally talk to the performance she puts on. She mixes emotion-drenched renditions of many of the tracks from Compostela with selected highlights of previous albums, transferring them to a solo acoustic performance without diluting any of their impact. Between songs she has us eating out of the palm of her hand, whether she's laughing infectiously at her own jokes, stopping a song to tell us she told us it was from the wrong album, asking us if she missed a bit of first song Bring Me A Rose out then reprising it or nearly taking herself out by getting too close to the mic stand during second track.

Like so many great songwriters she likes to tell us the tale of the song and it adds to the connection she makes with us. whether it's the story of Spanish Moon written while sick at a festival and watching TV rather than bands and how she met one of her inspirations Father John Misty wearing just a towel in Calgary. It's impossible not to warm to her when she asks the reticent audience to sing along to the song's refrain and chides us gently for not being loud enough.

She asks her good friend Liam Frost to join her on stage for Compostela's opening track Bombshell and it's evident in the joking around that there's a great deal of mutual respect and affection for two songwriters of similar ilk and outlook. It's followed by our favourite song of hers, No One's Gonna Love You, Quite Like I Do, which loses nothing in the translation from the love struck version that's on the album into something a little more raw with just a guitar. 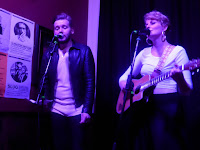 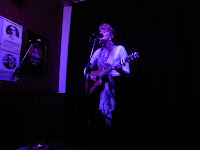 It's impossible not to fall for Jenn. If her disarming personality doesn't get to you, the straight-forward direct honesty of the songs will break down your resistance. We leave feeling we've just spent an hour in the company of an old friend. It's a travesty that it's taken her so long to make it over to the UK (her trip supporting Ryley Walker earlier this year was her first Manchester show), but hopefully she'll be back much sooner.