Spaceheads - A Short Ride On The Arrow Of Time 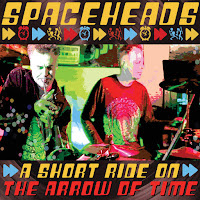 A Short Ride On The Arrow Of Time is Spaceheads' first album for nearly a decade. The project consisting of James’ trumpeter Andy Diagram and long-time collaborator Richard Harrison have worked together on and off for the best part of twenty years and this album is the cumulation of live jam sessions.

The album is split up into four continuums and you get different ones depending on the format you buy. Like all Spaceheads work, most of it doesn't fit the classic definition of song even when you consider there are no vocals. The excitement that they generate comes from a fusion of ideas, a moment of spontaneity captured by two minds with an instinctive feel for what the other is about to do.

Although Andy had left James before they produced their improvised Wah Wah album, the best moments of A Short Ride wouldn't feel out of place on that record. From Apples To Moons, the second track on the third continuum, the title track and Moon Boots in the fourth being prime examples of that as it feels completely freeform, devoid of any restrictions of song structure but incredibly coherent as a piece of music. There's pieces dotted throughout that evoke such feelings that you're being invited into their most private moments of creativity, mining a rich vein of improvisation and experimental sound effects that aren't always easy listening, but never dull or predictable.

As such A Short Ride is not a record to dip in and out of, there will be sections of it that make absolutely no sense taken on their own, but placed in the context of an extended piece of work, and treat it as one whole rather than a set of component parts, it feels like it just might be their masterpiece. It disappears away to almost nothing at times, as it does in Faraway Is Near And Over There Is Here when the minimalist approach creates an eery atmospheric, and at others it feels like every idea they have is being propelled at the listener such as Carry On Krazy Kaon and Flip To The Future at the start of the fourth continuum which have to be heard with everything around it in order to not sound like psychobabble.

Of course such a record isn't going to be to everyone's taste and it'll be a complete anathema to some James fans seeking out Andy's work outside the band expecting it to be similar in some way. It's a piece of work for a long dark night to accompany a mood to listen to something different, something to challenge the listener and to share in the joy of the moment of creation of art.

A Short Ride On The Arrow Of Time can be purchased, along with the other Spaceheads albums from their Bandcamp site.

Email ThisBlogThis!Share to TwitterShare to FacebookShare to Pinterest
Labels: Spaceheads