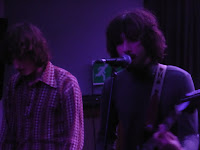 On the back of the recent release of their single Dreaming Of Another Girl, Hidden Charms are on what feels like a never ending tour of the country's small venues and building themselves a burgeoning reputation as a ferocious live band. We caught them for the second time at Carsons Bar in Middleton as they more than justify the growing hype.

The evening is opened by a short acoustic set by local teenager Kaiden Nolan which suggests he's growing in stature the more he plays and then by Bad Molly and Morning Pilgrims. Both bands suffer dreadfully from uncharacteristically awful sound to the point we don't think it'd be fair to review them. It's a challenge that Hidden Charms have to face head on and it's one they succeed in.

To be fair, the sound quality is vastly improved by the time they take the stage and they take no prisoners as they rattle through their first three songs barely pausing for breath. Their oeuvre is a fast, furious infectious one that takes no prisoners on the way. They have a groove, there's an underground garage thing going on, they have soul, they have a bit of funk, they have a look that boys will want to imitate and girls will fall for and a swaggering, almost but not quite arrogant cool that will draw people to them as well as their music.

And they can play. Interchanging instruments on a regular basis showing the diversity of their sound and talents, employing two vocalists dependent on the mood and pace of the song. They don't say a lot because they don't need to, the music does the talking for them. 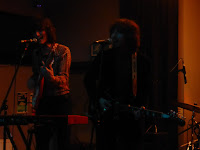 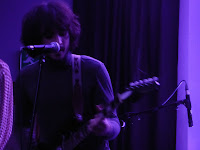 Dreaming Of Another Girl and Long Way Down (it'd be a travesty to dismiss it merely as a b-side) are all they've given us so far although forthcoming single Love You Cos You're There is even more addictive, exciting and, importantly, fresh sounding tonight. There isn't a weak song in the set though, nothing filling in gaps in the half hour or so they grace us with. The sound issues are forgotten, people are up dancing because the music dictates to you that you should.

Hidden Charms are a band you're going to hear a hell of a lot more about in 2016. Allow yourself to be seduced now.

They play the following dates :