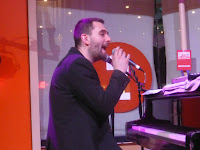 Manchester's Royal Exchange hosts one of the city's best kept musical secrets. Most Fridays at 5.30 there's a free show in the Great Hall. This week we were treated to a set by Minute Taker, aka Ben McCarthy, playing a mix of intelligently composed and structured songs and instrumental pieces to an appreciative audience.

Minute Taker is a somewhat appropriate name for Ben's project as there's an intricate level of detail in what he performs. His set features pieces from his latest audio-visual show To Love Someone Melancholy, which was debuted at this year's Chorlton Arts Festival, as well as tracks from his two albums Too Busy Framing and Last Things.

Musically, he makes use of a magic box of pedals under the grand piano to create loops and to control subtle backing tracks that add to the magic he creates with his fingers on the grand piano and a keyboard. Sadly the glockenspiel goes to waste as he'd forgotten to bring the sticks to play it. He also layers vocals on top using a two microphone set up to create something that's haunting in parts, but thrillingly evocative at others, but never dropping in its intensity, drawing the audience in and demanding our attention. 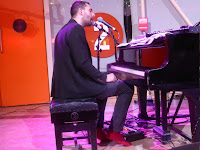 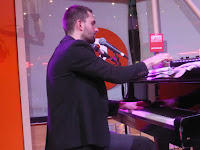 The songs are about real human emotions too, the office daydreaming of I Draw Lines, falling in and out of love of Haunting, Merge and Lead You Home as well as tipping his hat to his favourite song and artist of all time with a no-effects piano version of Kate Bush's Running Up The Hill which he puts his own spin and personality on to. There's also some evocative instrumental pieces such as A Saturnine Glow and Paper Mouse where his voice is treated as a further instrument, no words just sounds for emphasis or impact.

We leave mightily impressed by an artist who has been around for a few years now, but whose articulate intense oeuvre deserves a much wider audience. He's found a delicate balance between technology and instrumentation that so few manage to get right and created a set that's fascinating to both new and old listeners.