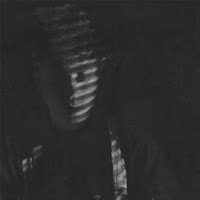 Absent is Annabel Allum's latest EP, a raw but exceptionally promising release that thrills with the intensity of both the words and performance across four songs. We stumbled across her at Carefully Planned Festival in the basement of Cord where she stunned a packed room into silence at her first Manchester show and picked up this EP straight away. It's been a long time since we were taken so aback by our first exposure to a new artist.

52 is a song about a house. The EP's sleeve credits "Love to everyone that has come through the doors of 52" and it's clear that it's a place that means a lot to Annabel as it opens with the line "52 was more than just a number to me" but the song's power in its enveloping sense of isolation lifting by the love from the place - "I'm an outsider" changing to "found my home in here, don't have to be alone again" - shards of light piercing through the often claustrophobic sounds she creates with her guitar.

It's a theme that runs through the whole EP - that these songs form a deep emotional catharsis, part of a confessional healing process of a troubled confused mind that's finding its way and place in the world. For any artist to create something that's this emotionally intense is an astonishing feat, for a shy teenager to do it with little fanfare takes it to another level. Once you've lived through it, you're gunning for Annabel as she's the heroine of these tales.

Absent has threatening thunder-like clattering drums in the background as Annabel's vocals emote every word of the song, a song about not fitting in, trying to find her place in the world amidst all types of confusion, squeezing every last piece of emotional drama out until the song stops as dead as when it started.

Prison Food is another song of turmoil and fighting the worries of growing up in an uncertain world, Annabel exhorting "lowest of the lowest, nothing to lose" but with the aggressive counter to it of "don't give me no pity, I walk with my head held high."

Shreds, which closes the EP, tells of an experience in a club where she was told she didn't belong by another girl which sent her home in a rage that planted the seeds of this song. "People try to tell me who I am, I tell them I am my own signs" is a statement of independence, individuality and a refusal to conform both in words and music that demands of her antagonist whether "did I make you question?"

Absent is a unique set of songs, an almost diary like exhumation of the fears encountered by someone growing up in an uncertain world, uncertain of themselves and searching for their own identity, but with an unquenching will to put their fists up and fight those that seek to judge and put them down. The intensity of the music matches that of the words which only accentuates the impact. It's an absolutely enthralling EP, not easy but absolutely rewarding listening.

Absent is available from Annabel's web shop and iTunes.