Tonight's Ritz show is the penultimate of The Lemonheads' first UK tour for three years. Led by the charismatic Evan Dando, who doesn't look like he's aged a day in the last two decades, they mix twenty-six songs from their back catalogue as well as some judiciously selected covers and Evan Dando solo tracks leaving the Manchester audience suitably impressed.

For a few years in the early 1990s The Lemonheads were at the forefront of a crossover movement between grunge and guitar pop. Their cover of Simon and Garfunkel's Mrs Robinson (naturally ignored tonight as it was the antithesis of so much else they did) and the subsequent reissue of their to then ignored classic It's A Shame About Ray and the follow up Come On Feel The Lemonheads made them A-listers. As trends changed, their commercial star waned somewhat and their line up moved around yet they still managed to churn out inventive, challenging and fun records.

The set Dando chooses to play tonight is perfectly paced for the evening. They start with the four piece band - with Chris Brokaw on guitar, Jen Turner on bass and Todd Phillips on drums - with a series of their quieter more contemplative tracks off Come On Feel The Lemonheads - Dawn Can't Decide, It's About Time and Down About It and lesser known tracks such as Hospital and Tenderfoot off Car Button Cloth and New Mexico off their last album Varshions. 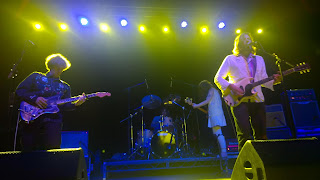 The other three then leave the stage to Dando and he plays solo versions of Being Around, an inspired cover version of Willy Mason's Into Tomorrow and an accapella version of Frank Mills where he's joined by several hundred Mancunians in off-key unison (us not him). Chris rejoins and they pick up the pace for a section that includes a number of songs from Dando's solo records (Why Do You Do This To Yourself, My Idea and All My Life), as well as Ride With Me from 1990's Lovey and a cover of Victoria Williams' Frying Pan adding a harder edge as the set continues to prepare us for their final onslaught. The crowd are less familiar with the songs here so start to get twitchy, but are drawn back in by the obvious chemistry between Dando and Brokaw.

The closing section sees all four reunited on stage and they run through a section of some of their best loved songs, inevitably focusing on It's A Shame About Ray, starting with Confetti, the title track and the confessional My Drug Buddy, but also featuring key later single The Great Big No and Stove, one of the few nods to the pre-Shame days. This gets the crowd moving and more reactive than earlier when they stood admiring transfixed by the continued quality of the songs and Dando's often distant but nevertheless intoxicating stage presence.  He even throws in a teaser section of a new song. A barefooted Turner goes walkabout on several occasions around the stage and finishes the set rolling on the floor as a ballistic Rudderless brings us to a fitting conclusion.

There's a prolonged break before they finally come back on stage, and the encore is short but sweet. Alison's Starting To Happen starts off speeded up and is done and dusted in around two minutes, but it encapsulates everything that was, and still so, so fantastic about The Lemonheads. Twenty odd years since they broke out of the commercial wilderness those songs haven't dated at all because they're based on the finest most noble songwriting traditions of all substance and little fluff and Dando and his band deliver them with the fire in their bellies that has never diminished.

Email ThisBlogThis!Share to TwitterShare to FacebookShare to Pinterest
Labels: The Lemonheads