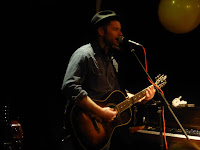 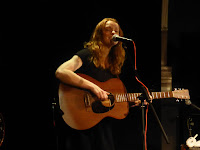 Everyone's doing the classic album thing these days. It's almost a cast iron guarantee of trebling your audience at the drop of a hat. But as ever David Ford doesn't play by the rules. He's won a dedicated band of followers over the last ten years and him deciding to play his debut album I Sincerely Apologise For All The Trouble I've Caused isn't a commercial act designed to make him rich for twelve months, but a celebration of a very special album that defined a time and place for a small group of people, himself included.

At about quarter to eight with half the audience already gathered in the loft theatre space of the Kings Arms, just over the Salford / Manchester border, the lights go out. It's quickly ascertained that it's a serious problem in the whole area and with North West Electricity tweeting a fix time of 11pm things don't look good. Plans are made for a blitz spirit acoustic set in the downstairs bar. That unique experience is averted as the lights shudder back on at quarter past eight and any disappointment at missing out on a one-off gig is soon muted.

Opening up is Jess Morgan and her seven song set is an impressive precursor to the main act. Armed with just an acoustic guitar, a voice that accentuates the emotions of the songs and a disengaging politeness and charm, she plays a mix of songs from her already substantial catalogue as well as a number of new songs. 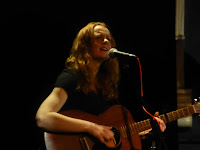 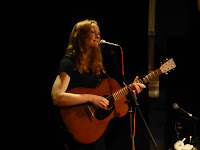 Like Ford she's a raconteur who tells us a little more about the subject of her songs such as her experiences in Kenya in The Missionary or the age old subject of heartbreak in Still In Fashion. It's our first time seeing her and we wouldn't hesitate to watch her again.

David takes to the stage shortly behind schedule due to the earlier drama and starts by playing his debut album I Sincerely Apologise For All The Trouble I've Caused which is celebrating its tenth anniversary this year.

This is no ordinary staid run through a classic album though, and it thoroughly deserves that status irrespective of its commercial success or lack thereof. Chatting just as the power went out we talked about anger dimming with age and resignation to the state of things setting in, but I Sincerely Apologise is the mark of a 27/28 year old man angry with the world around him, disillusioned by his record company experience to date making a record for himself that, through dint of its sheer brilliance, found a connection with people that's endured. 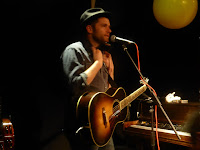 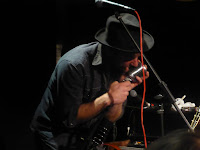 He plays the album in order and such is his natural inclination to tell us the story behind the songs or to revisit them, stretch them past the confines of the recorded version as he does on State Of The Union where he ventures into the audience and his ode to a news reporter crush Katie or when getting the audience to join in on Cheer Up You Miserable Fuck, the album stretches to an hour and a quarter.

Playing the gig solo means that David can create the one man band feel of the album. On State Of The Union, the song he tells us that is the one that still allows him to do this as the home made black and white video made him "hot shit" in the industry for a short period in 2005, he uses piano, guitar as guitar and an improvised drum and various percussion through his hand made looping set up to create something with a fury and passion a full band would struggle to create. And it's an even more damning indictment of our current government than it was back then - the line "preach on with your message of Go Fuck The Neighbour" being particularly prescient.

The looping is also in play for a ten minute Cheer Up You Miserable Fuck where David laments the success of his Wash Up You Miserable Fuck tea towels which are doing a roaring trade, comparing the five minute effort taken to make them with the time spent slaving over an album. From the reaction everyone in the room already owns I Sincerely Apologise... but his point is made that often novelty (the use of the swear word in this case) often can usurp the song.

It isn't all quite so complex though. What Would You Have Me Do is set to piano and is jaw droppingly powerful as its raw emotion punctures the silence whilst Don't Tell Me is one violent guitar sound so stark that the pent up anger the song contains is multiplied exponentially and opener I Don't Care What You Call Me relies only on acoustic guitar and mouth organ to deliver its caustic venomous put down to David's detractors.

Most of the songs are introduced with some background to the song. For Katie David tells us of a young Ford crush on Katie Derham, the news reporter, and how he'd silence his house full of young men to hear her talk. He ad libs a number of lines about stalkerish behaviour at the end of it too to great effect.

Laughing Aloud closes the first part of the set (David tells us he needs the loo so we have a break) and it feels like a defining point. It starts from humble beginnings and a quiet acoustic before building slowly until it explodes into life lifting us all up with it. It's epic, yes, but with no hint of bombast, powerful but completely under control and a fitting end to the record.

After the break David comes back and starts with some more recent material. Pour A Little A Poison, the opening track from his last full LP 2013's Charge and One Of These Days from last year's The Arrangement EP show that his creative juices haven't dimmed over time as his horizons have expanded. Poison is a head first race to the finish type of song that tells the story of a disastrous tour of the US Deep South whilst One Of These Days, a duet on record, is a beautifully emotional yet resigned and slightly bitter lament to a lost love.

He cheers matters up with a piano version of Decimate, possibly his most commercial offering as ever as the focus track from that difficult second album that was laden with the weight of expectation of a medium sized budget and misdirected record label hype. It's a great pop song surrounded by great songs and Ford almost acknowledges this by dropping a medley of December 63 (What A Night), Young Hearts Run Free and (Your Love Is) Lifting Me Higher into the middle of it.

But it's back to the contemplative O'Sullivan's Jukebox, again from The Arrangement, to close the set as he reminisces back to his youth in Eastbourne and the only Irish bar in town where he spent his days discovering the joys of Guinness. He even manages to get away with a quip mid song about both United and City being hated by neutrals when he refers to being the rock of the back four.

Replaying and revisiting I Sincerely Apologise For All The Trouble I've Caused is a revelation. It's a unique album in the sense that it feels so utterly free of pretence, of trying to hard to create something to sell. It's deeply emotional and personal in places, a good old rant at the state of the world in others but never dips in intensity or quality throughout. Ten years or so ago, Ford inadvertently created a masterpiece from the sanctity of his basement with nothing to prove to anyone and nothing to lose and tonight is a celebration of that fact.

David Ford’s website can be found here.  He is also on Twitter and Facebook.  I Sincerely Apologise For All The Trouble I've Caused will also be released on vinyl for the first time by the end of the year.

Our feature on I Sincerely Apologise For All The Trouble I've Caused can be found here.

David's tour playing the album in full continues at the following venues in October :