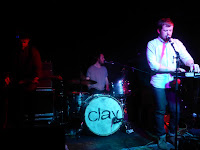 It's been a few months since we last saw Ist Ist and they've been growing horns whilst we've been away. Louder, more direct than ever before with new songs that reveal a burgeoning diversity of sound and mode of attack.

Tonight's set is a mix of the songs with which they announced themselves to the world less than a year ago and the songs they've introduced since. Left For Dead and Rats have all that pent-up aggression and anger they did back then and then some more. There's a fury deep down in Adam's delivery of the words that you wouldn't want to meet on a dark night on your own. And the music is even harder than before, where they sounded a little like Joy Division before they now sound like the hardest heaviest metal band at times.

But that's just one string to their ever increasing armory. Rather than just employing the guitar / bass / drums assault, they've now introduced a keyboard into the mix which Adam plays on a couple of songs as well as one where he leaves it to just bass and drums, a raw approach that worked so well with drummer Joel's previous band Ruby Tuesday. Here it just strips everything even closer to the bone than they've been before. As a result you can actually dance to Beneath The Waves and, ironically, The Dance, such is the natural instinct for rhythm that these two songs betray. 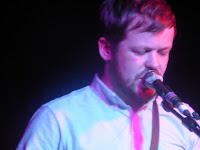 Ist Ist are still growing. No longer could a detractor put them in a box and categorise them dismissively. They still have the fury and power of those early shows and that massive fuck you attitude, even more so if we're being straight, but we're seeing new sides to them with every song they reveal, every twist and turn they take. It feels like the journey is just beginning.

Ist Ist played Love Song, Left For Dead, Animal, One To One, Brutalize, Beneath The Waves, The Dance and Rats