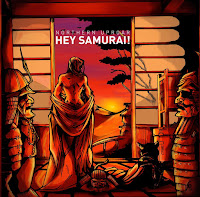 Stockport veterans return with their fifth album Hey Samurai! Stuart Ralston discovers a band he missed back in the day and finds them in fine form.

Releasing their debut single back in 1995, Stockport's Northern Uproar had bucket loads of Manc charm and swagger and I for one, overlooked them. Twenty years on from that debut and time is a great healer.

New album Hey Samurai! is a departure from the sound that brought them chart hits and a Top Of The Pops appearance. Gone is the lad rock sound to be replaced with something much more mellow. Take opener 24 Hours, 24 Days as an example. It's driven along by some funky wah wah guitar, a smooth Hammond sound and a confident, mature vocal from Leon Meya and sounding more akin to bands like Doves and Electronic than those that Northern Uproar were originally lumped in with. Chasing Demons is even more laid back and awash with acoustic guitars.

Hey Samurai! is an album of many contrasting styles with a predominant Mediterranean theme on several tracks, most notably the ballad Jackals and Start It All Again whereas Outlaws Robbing Trains sounds almost like a different band entirely. Taking its cue the Mondays, it is a funky, multi-faceted groover. It is the pick of the album. Samurai comes a close second. Again featuring that cool Hammond sound, this is a style of Northern Uproar I am keen to hear more of.

Hey Samurai! finds front man Meya in fine voice.  There are some real gems on the album and it is well worth checking out.