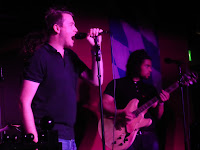 Manchester's My Igloo produce dirty soul music. The six-piece's songs are like journeys, magical mystery tours that take you down so many paths, with guitar, keyboards and trumpets leading you pied piper style to their denouement.

My Igloo don't look like a band in the traditional sense. They're past the first flushes of youth so there's no pretense to look cool, there's no image thing going on, their focus is the music and there's so much in there to dig your teeth into as they never stand still, flitting from one style to the next effortless, almost without you noticing they've done it until it's happened.

This could of course be a recipe for disaster and chaos, but it's testament to their sense of groove and rhythm that it works pretty much without fail. There's loose reggae influences in Garden and considering there's six of them there's an awful lot of space in the songs as they work together rather than against each other. Good Time Girl (Do Be Dum) has a new arrangement and is probably the most immediate and catchy song, starting with harmonies as keyboard player Andy starts the song off before it ascends into an insanely upbeat and catchy rhythm that's full of soul and intensity before changing direction yet again. 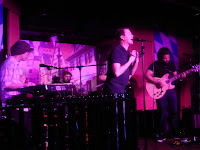 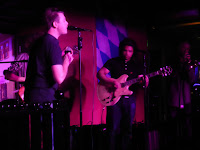 They have new songs too. Badman  plus the unplanned encore of Flowers, which is so new Tony has to read the lyrics. They're brimming with promise, already showing that as well as constantly developing their older material, they're writing new material that stands up against it to the extent that they can even drop first single Bashment from the set. Badman has flashes of trumpet running through it, cutting through the murky scurrying beat that the rest of the band create and Tony's sandpaper rough vocals. Soul is perfectly titled as you wouldn't think it was out of place in a dark dingy soul club, but it nods to swing at points such is its diversity and the trip it leads you on.

There's so well received in the post-derby atmosphere that the crowd demands an encore at the end of a wild Watch Out, amazing given where we are. Flowers is half-finished, but it doesn't matter, My Igloo create a vibe, a feeling where rigid song structures are persona non grata so its inherent looseness is actually a positive rather than a negative.

They might not have the chic and cool of lesser bands, but there's something intoxicating about My Igloo, something that you won't hear from anyone else and once it grabs you, it won't let you go.

They play Chorlton Dulcimer on Saturday (October 31), before headlining the Night And Day Cafe in Manchester on November 14 and supporting The High at Manchester Academy on December 13.