Reverend And The Makers - Mirrors 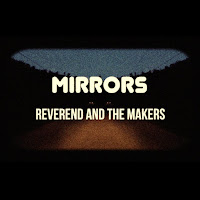 Mirrors is Reverend And The Makers' fifth album and a marked departure from the bass-heavy dancefloor oriented @Reverend_Makers and Thirty Two. It's a concept album of sorts, recorded in part in Jamaica, where they filmed a DVD to accompany the album. It only last thirty four minutes for fourteen songs, but it takes the listener on a memorable musical journey. Unlike so many concept album, it hits the spot every time and is their best album yet.

After the social media (and banging tunes) driven success of their last two albums, Reverend And The Makers were at a crossroads going in to record this album. Having drawn a partial line under their career to date with two sweltering nights at their hometown Sheffield's O2 Academy where they played all albums in full, a change in direction was promised and from the very start Mirrors does exactly that. In a world where the album format is dying and being disrespected even by some great bands, Mirrors is an album that needs to be listened to in full, in order to understand it, to get it properly and for it to make complete and perfect sense.

There's parts of the record where they hint back at their debut album. The Trip, all ninety two second of it, wouldn't feel out of place on The State Of Things, neither would The Gun, both in style and subject matter, observational lyrics about love and life in a working class town, but with an intelligence and world-awareness that many miss due to Jon's relentless enthusiasm and fearless intent to speak his mind on any subject even if his opinions might be controversial.

But then it moves to something they've never done before and what you wouldn't expect from them. Black Widow starts off like the bastard son of Sympathy For The Devil and combined with the brass-laden Stuck On You then feels like they've undergone that transformation Primal Scream did from Screamadelica to Give Out But Don't Give Up and turned into a full on rock and roll band. The Beach And The Sea is a soft headrush of melancholic acoustic guitars that does what the song says and washes all over us leaving a warming glow in its wake, whilst Makin' Babies is a joyful carefree heart ready to burst with love two minute celebration of the first taste of parenthood.

El Cabrera is a Latin-feeling track that doesn't really pass as a song, but feels like a perfect fit to the mood and intent of the record. There's familiar moments like the guitar riff and the jubilant brass on Mrglassalfempty that reminds us of something we can't put our finger on, but what makes Mirrors so intriguing is the way it fuses so many ideas and influences and molds them into something coherent and cohesive. There's little of the likes of Bassline or Shine The Light that won over so many fans a few years back. Mirrors will show a different and much more diverse side of the Makers to them.

Blue is classic pop music, an insanely simple riff that you won't be able to shift from your sternum and a chorus laden by vocal harmonies that grabs you and won't let go. The brilliance of Mirrors is at times the fact that it doesn't try to be too clever, be anything it isn't.

Mirrors is a band effort too. There's the Joe Carnell duet on Mr Glassalfempty, but Ed Cosens sings the wistful tinged with regrets Last To Know and Laura one of the album's highlights, the title track Mirror. Whether it's a deliberate attempt to include each one singing or just the way the album worked out, it just adds to the complete feel of it, that it's a band creating a piece of work as one whole that's all inclusive rather than a set of songs with no common thread.

Concept albums are generally a bad idea. Adding a film to go with each song is generally an even worse one. But sometimes a band manages to pull it off and it makes perfect sense. Mirrors is just that. It's unmistakably Reverend And The Makers as Jon has a unique voice, both in sound and subject matter, but it sounds like nothing they've done before. It's their best album by a country mile from the already high standards they'd set and you need to watch it at least once with the DVD because that makes perfect sense as an accompaniment and an embellishment to the music.

The album - in a variety of signed formats - as well as extras including a book of Jon's lyrics and signed lyrics sheets can be ordered from their Pledge Music page.