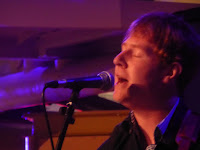 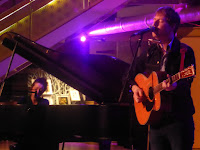 Cavan Moran played an intimate set as part of the SFX series of events in the Grand Hall of Manchester's Royal Exchange theatre to preview tracks from his forthcoming debut album Forever On The Road (Forever At Home) which is being released in France in December and then in the UK early next year. Backed with a four piece band, including Emma Whitworth on piano and vocals, he revealed a diverse range of tracks that form that record.

The Grand Hall is an exquisite setting for live music and SFX have been putting on these events for quite a while now to entice people in before the main event in the theatre, but they've also become a well-preserved secret for some of Manchester's best emerging artists to showcase themselves and Cavan Moran is no exception.

He's been around the city's music scene for a couple of years now, but on the basis of the tracks we hear tonight many more people are going to know his name by the end of 2016. He's accompanied by Emma on backing vocals and piano as well as Steve on bass, Johnny on trumpet and Nicky on drums and between them, they tell compelling stories set to music, whether it be the upbeat folk and country-tinged openers The Wheels Of Rhyme and Lord When She Comes or the title track from the Five Simple Crimes EP.

The highlight of the set for us is the magnificent The Ballad De Gare De L'Est, a tale of the breakdown of a relationship in the French capital which leaves Cavan musing "don't love anything that cannot be replaced" The music sets the mood of the piece perfectly. Nothing is overdone or undercooked, the brass hits the right place at the right time, the shuffling drums create the framework of the song for Cavan to tell the tale. 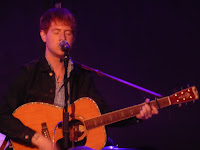 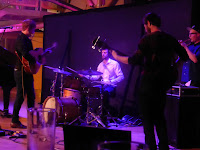 There's times such as on the beautiful Into The Wild where the whole thing feels so fragile, just piano and gentle acoustic guitar, yet so much emotion is exposed within the fleeting few minutes. A broken string means that unfortunately we don't get more of just the piano, guitar and the two voices combining, but it's compensated by the band coming back and them finishing the set with Pitched To A Pattern which closes the album. It builds to a exquisitely controlled climax and based on tonight's set will be a fitting way to finish off an album we're now excitedly looking forward to.