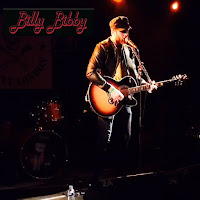 Billy Bibby has been building a following of his own with a series of acoustic gigs and low-key releases of songs on the internet ahead of launching his new band. Hideaway is the latest of these and is an impressive classic-sounding acoustic tale of a broken relationship.

The name might sound familiar and you'd be right. Billy was the guitarist in Catfish And The Bottlemen, the one that always looked too modest and real and therefore slightly out of place in a band that was being groomed for mega-stardom, the one that left unannounced just before the release of The Balcony.  Since then, he's been slowly putting out a series of beautiful acoustic songs and playing low-key gigs around the North West and Wales.


Hideaway is probably the pick of the bunch so far, a world-weary tale that many men could relate to about being messed around in a relationship. Deliciously crafted vocal harmonies in the chorus contrast perfectly with the resigned, world-weary but crystal clear lead vocal. It sounds great as an acoustic track, but also holds plenty of possibilities for transforming it into the band setting for the gigs for the exciting announcements he has forthcoming and the gigs he has lined up with the band in 2016.

He plays the following shows: