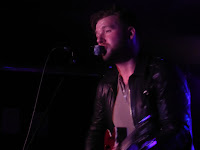 Liam Frost is one of Manchester's most underrated musical geniuses. His two albums to date, 2005's Show Me How The Spectres Dance and 2009's We Ain't Got No Money, Honey, But We Got Rain, are regarded as secret classics by those fortunate enough to have crossed their path. His recent The Wild Places EP showed that the fire and creativity is still burning in his belly, but this show, and his recent London one, are touted as the last he will do for a while as if we're reached a fork in the road. But this full band show, a rarity in recent years, serves as a reminder of one of the city's most articulate and engaging songwriters and one that's not afraid to have a bit of fun doing it.

The set is a mix of the two albums and shows the wide variety in Liam's work. There's the upbeat radio friendliness of Your Hand In Mine, the emotionally charged riotous exorcism of The Mourners Of St Paul's or the indie-waltz of Shall We Dance contrasted against the simple emphatic If Only We Could Sleep, Skylark Avenue and Is This Love. The band, long-term friends Neil, Christian, Nicky and Richard, know the songs so well and as a result they capture just the right vibe. The set runs through a whole gamut of emotions of love and loss. Around the room devotees mouth along to every word because these songs mean a lot to people because their sense of realism and honesty make a connection.

There's an acoustic section mid-set to remind us of the stark simplicity of songs like Try Try Try, which has the audience providing impromptu backing vocals, and Road Signs And Red Lights. He also performs a much-requested cover of Sade's No Ordinary Love. The band come back and finish with our two favourite songs from The Wild Places EP - When I'm Alone and Who's Going To Love You, hopefully a pointer towards a third record.

With the main gig over, the band return to the stage and continue a theme Liam's followed on line of unexpected covers. Tonight we get Let's Stay Together, a song that allows Liam to demonstrate just how soulful his voice is, Justin Timberlake's Senorita which is doused in brass and the ultimate in eighties cheese Wham's I'm Your Man. It's a fun way to end a gig, possibly not to everyone's taste, but a light contrast to the emotional outpourings of his own work.

Liam's in good form too, commenting he's keeping his leather jacket on to avoid back sweat making his shirt see through, joking about Sky Plus and slippers when someone calls him a rock star, telling us of the time he met the guy Sade wrote No Ordinary Love about and laughing that we should check a guy's hard drive who shouts for Britney as an eighties classic as she was seven. 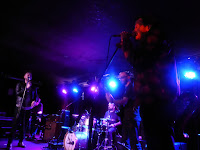 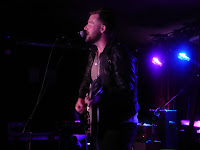 The most immediate thing as we leave is the thought of how many truly great songs Liam recorded over those two albums, even being able to leave out his first single, the unfeasibly catchy but unrepresentative, She Painted Pictures and it's follow up The City Is At Standstill.  The mystery remains why he didn't break at a time far lesser songwriters were; perhaps bad record label decisions, that soft affecting Northern pronunciation of "luv" that melts hearts north of Watford, a willingness to enjoy the moment rather than focus, the (ridiculous but not inconceivable) thought that if he looked then like he does now the machine might have seen him as more marketable by those who decide such things; whatever it is, it's one of the genuine travesties of the last decade in music.

We hope that these two shows form a comma rather than a full stop, that Liam's taking the time out needed to come back with a third album rather than knocking it on the head, because The Wild Places EP and his recent Tokolosh band collaboration, show that there's still a fire burning, that he still has a lot to say and that these songs should not and cannot be filed as an afterthought in the city's musical heritage, because it all deserves so much more.