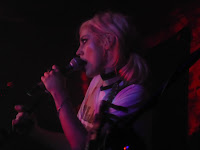 For a band with only a self-released EP and single to date, it's astonishing to see Soup Kitchen practically sold out for a band generating a buzz by word of mouth on the back of some scintillating live performances. Black Honey are a band on a mission though and the gig ends in a huge stage invasion and a room full of love going their way.

The set starts with the two songs from their recent single Spinning Wheel and Madonna and the sedate opening bars of the former reveal little of what's to come with Izzy's butter wouldn't melt vocals in the first verse before they switch from Jekyll to Hyde and let go in a ball of pent-up power and aggression. The crowd don't react initially looking on in wonder at the change they've undergone and Izzy's boundless enthusiasm that she throws into it.

It's a pattern that repeats itself in structure, but not in detail as the set progresses through three tracks from their self-released demo EP. Izzy comes to the front and almost topples off the makeshift extension to the front of the stage that holds the monitors and kicks over her pedal board as she retreats. She's searching for a connection with the crowd and that bond grows as the set progresses and her band mates let loose. 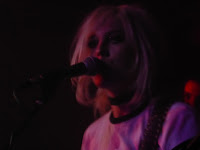 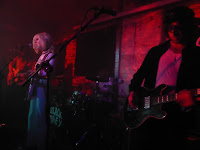 The last four songs are more recent with only penultimate track Corinne recently released on Soundcloud and they show a band that's developing faster than their output is growing. The crowd are warmed up by the breakdown in Mothership where Izzy demands we all wave our hands in the air and join in the "hold me tight, sway me slowly, wait for the mothership to control me" which we do as if we're hypnotised and you can imagine this being replicated in the not too distant future in much bigger places than this before the rest of the band crash back in and the centre of the crowd merge into one heaving mass.

As the last song You See It All reaches its breakdown Izzy pulls a girl from the audience up on stage and she's followed by a full on invasion that sees Izzy buried under a pile of bodies, water and equipment everywhere, but she gets up with the hugest grin on her face as they've got the reaction they're looking for from the audience when she tells us "we've waited a long time for this".

Black Honey have everything they need to succeed in the murky world of music today without having to lose their integrity or compromise themselves to get there. They've already got the songs to produce a great debut album, they absolutely love what they're doing,  Izzy is a natural band leader who girls and boys will love as the adoration after the show at the merch desk showed.

They are going places very quickly, you need to see them now.

They played Spinning Wheel, Madonna, Teenager, Sleep Forever, Bloodlust, Mothership, All My Pride, Corinne and You See It All.