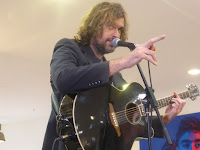 To support the release of their fifth album Mirrors, Reverend And The Makers are doing a short tour of UK record shops to play a short acoustic set and sign copies of the album. We caught them play five songs at Manchester HMV and get up close and personal with the Rev.

Arriving fashionably late as an hour previously Jon and Ed were sat in Jon's Sheffield garage for a makeshift album playback and Q+A session that says so much about how Reverend And The Makers really are the band of the people. No band in the country have that relationship with fans that's seen Jon spend the last month travelling the land to play gigs in people's front rooms. He immediately dismisses HMV's barrier between the crowd that's crammed between CD shelves and the small stage as well as calling down to the ground floor to tell everyone to come up and watch.

They start with Black Widow, the lead single from Mirrors, and it's testament to the quality of that record that the songs lose nothing in their translation to this two-man acoustic format. For a band over a decade into their career, they've produced a record that has had pretty much across the board positive reviews despite it being a significant change of direction. The Gun continues that psychedelic vibe that flows through the album. Another feature of Mirrors is that Joe, Ed and Laura all sing lead vocals on a song and Ed sings Last To Know, which augurs well for his rumoured solo album, as it's a beautifully simple but emotionally rich tale of a relationship breakdown. Making Babies, with some delicious vocal interplay between two, is every bit the celebration of finding out that he was going to be a father for the first time as it is on the record.

They conclude the short set with Heavyweight Champion Of The World, if only to placate the one guy who vocally doesn't get this is about promoting a career-defining record rather than dwelling on the past. Several hundred people nevertheless join in and bystanders are most likely bemused by a chant of "just be like everyone else" flowing out into the Arndale. 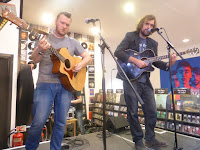 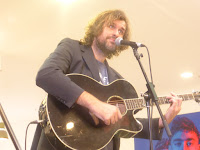 Jon is on fine form as ever. He looks at the posters on the wall of previous in-stores and notices Gary Barlow and notes that it must have been "when he was fat and in Heartbeat" and he also tells us that the riff for The Gun is similar to the pink elephant part of the film Dumbo and that it was the first exposure most of us had to psychedelia. For such a giant of a man with a social media presence to match, he's also incredibly modest, laughing as he tells us that he's had so many great comments about Last To Know, which has pissed him off because he didn't write it.

Once the set's over Jon and Ed sit down and sign everyone's albums, taking time out to chat to each and everyone who comes past. Jon has an incredible recollection of names and faces given the number of people he meets in the flesh.  In a world where music is being increasingly sanitised and success determined by faceless executives and TV shows, the people are fighting back and the Rev is our leader.