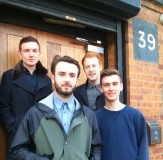 There are a number of bands emerging from Manchester at the moment with a true understanding and love of the art of songwriting. Whilst nodding to the past and the eras of classic guitar-driven alternative pop, they're creating something that also feels completely contemporary. One of our more recent discoveries are four-piece Mayflower who've just revealed their fourth song Sienna and who headline the Night And Day on Saturday. We had a chat to find out more.

In six short months, Mayflower have revealed four tracks to us, each different in their own way, but with a uniting sense of a band that's developing into something special. A band that knows its musical history, isn't afraid to tip its hat to it, but is creating a sound that feels of the here and now. Like Blossoms, Vryll Society and Hidden Charms, we think they're a band you won't be able to avoid this time next year.

First of all, could you introduce the band and tell us how you got together?

Mike : Mayflower is Olly Gaydon on guitar and vocals, Jake Calvert on guitar, Jim Mulherin on the drums and myself (Mike Cromey) on bass. The band fell together really; Olly and I were mates from school and we’d known Jim for a couple of years through Uni. Olly had been playing and writing his own material for a few years, and had wanted to start a band for a while too, so one week we booked a practice room in Salford and just tried it. We weren’t great to start with, but it was a lot of fun, so we just kept at it and then Jake joined about four months later.

Jake : I had a bit of a false start when I joined briefly in early 2014 before working abroad for six months. The day I got back on home soil, in October of last year, I pretty much travelled straight from the airport to the rehearsal room and things properly kicked off from there.

Olly : The name was originally a lyric from an early song that I took when the band was a few months in. There’s a Mancunian connection we recently discovered as well, it was the name of an old club in Belle Vue that hosted some pretty iconic Manchester acts in its time, like The Fall and Joy Division.

Do you write songs together as a band or do you have one songwriter who brings ideas to the rest of you?

Olly : In the early months I would get the whole song ready before introducing it to the band. However, recently we’ve had a lot of joy getting a sound or theme from a jam and then I’ll piece it all together later with a new chorus or verse.

Jim : We’re much more comfortable on our instruments now than we were when we started - I was coming from a position of pretty much having to learn the drums from scratch. So while it was slow progress in the beginning and contributing to the songwriting wasn’t really possible, as we’ve learned how to play together it’s become more of a joint effort. Olly’s still sparking the initial ideas, but we’re able to back him up straight away and then worry about the detail of our individual parts ourselves. We’re all in our first band as well, so none of us are coming in with ideas of how things should be done, which probably helps.

Your songs remind us of moments of classic indie guitar pop from the last thirty years, but with your own twist on them. What bands did you grow up listening to and how do you think they've influenced your sound.

Olly : I personally grew up around a lot of Oasis and indie bands from the early ‘00s, but at about 16 I started listening quite intensely to The Beatles and Bob Dylan, and then many of the artists they’ve inspired within in last 30 years or so. I think ultimately you have to get into the heads of the audience these artists played to, and ask why were they so well received. Then think about what timeless qualities do they share, why do we listen to them now even though they’re half a century old. So there are bits of our music that are reminiscent of bands throughout the last 30 or more years, but we have our unique styles to add to the mix.

Jake : We all grew up with similar tastes as youngsters and then started delving deeper into the past. I found artists like The La’s, Shack and Fleetwood Mac when I was 16 or 17. A lot of influences just seep into our music naturally, although it’s hard to put your finger on what exactly. As a guitarist I particularly admire Bill Ryder-Jones and John Squire, I love how fluid and melodic their playing is.

What have been the highlights of your time together as a band so far?

Olly : Our first interview live on BBC Introducing was quite a big step for us earlier this year and the relief afterwards was pretty euphoric, but for me the highlights are when we begin rehearsing new songs and they all suddenly take shape and make sense.

Jake : Playing live on BBC Introducing was one of the highlights of my life, never mind the band. What a huge rush. I enjoy every moment of being in the band though, just turning up to practice is exciting.

You're headlining the Night And Day on Saturday. How does it feel to be headlining such an iconic venue and what can the audience expect of you as a live band compared to the songs we've heard so far.

Jim : We’ve played there a couple of times now and it’s definitely one of our favourite venues. Night & Day’s history speaks for itself, some of the bands that have played there in the last 20 odd years are massive, and ones we’re big fans of, so to be headlining there is a real buzz.

Olly : The set feels quite complete now, it’s well-balanced and has a good amount of variation, so for people who aren’t familiar with us, or haven’t heard our songs, they should be able to take something positive from it.

Olly : We’ve put a lot of work this year into our songs and live set, so now we’ll look to get them to as many people as possible. We all feel that there’s only so long you can play music people enjoy before good things start to happen. A festival would also be nice.

Mike : I think we just need to carry on with what we’ve been doing. None of it’s been planned, but we work hard and all really enjoy it and it’s paid off this year. Hopefully there’s a lot more to come in 2016.

And lastly, how would you describe yourself to someone who's never heard of you before?

Jim : We’ve got a fairly wide ranging sound, which makes it difficult to pin down to one particular style, but it’s strong, melodic, open guitar music and hopefully there’s something in there everyone will be able to enjoy and want to hear again.

Mayflower headline the Night And Day this Saturday (3rd).

Email ThisBlogThis!Share to TwitterShare to FacebookShare to Pinterest
Labels: Mayflower