Track Of The Day : LIINES - Never There 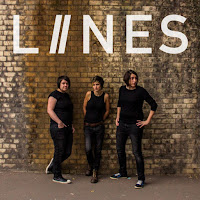 Never There is LIINES' debut single and is released on November 23 after their headlining set at Night And Day on November 21. Following an EP of demos sold at shows, this is their first proper release and it captures the scale of their live sound perfectly.

LIINES are Zoe on guitar and vocals, Steph on bass and Leila on drums and they formed out of the ashes of Hooker. They've built up a big reputation around the circuit in Germany and Austria playing to crowds of 500 - 1000 on a regular basis and they're starting to make a name for themselves in Manchester as the hardest, most ferocious sounding band in town.

We hear bits of the sadly departed Solar Race in the sound and the fearsome punk spirit of the likes of Sleater Kinney in there too, but LIINES don't sound like anyone else in Manchester or indeed the UK at the moment. There's an intuitive feel to their live sets, where they cram twelve songs into half an hour with no room for fluff or showing off, just a full on assault on your senses that'll knock you off your feet and leave you wanting more.  Never There is a great introduction to LIINES, but there's plenty more where it's come from.

Tickets are available from this link. There's three other great bands on the bill as well as always at Scruff Of The Neck nights.