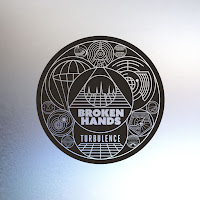 From the outset, Turbulence makes you sit up and take note. Spectrum is a bold opening - almost anthemic - showcasing Dale Norton's impressive vocal range. The band meanwhile create their own brand of rock n roll, the sort Bobby Gillespie would be proud of. Meteor continues in the same vein before Should I which takes the band off in another direction entirely. Sounding like a Stooges / Gravity Grave-era Verve fusion, it should be played loud. It sounds as if it was cut for a 7" single as it only runs to 3:45 which is a shame as it is one of those tunes which should be an epic but then has an unexpected coda where the organ and bass combine to show yet another side of the band.

It isn't all psychedelic rock and roll though as tracks like Impact and Collide show a softer side to the band with Norton's vocals allowed to take prominence. 747 sees the band in a  more experimental mood with moogs and synths replacing the more traditional rock instrumentation of title track Turbulence. Who Sent You is great upbeat rocker as is Death Grip. The Nuggets influenced WTLL brings the album to a close.

Turbulence is an impressive,well produced debut which showcases many sides to Broken Hands from the conventional to the more blissed out. We look forward to hearing them in the live arena.