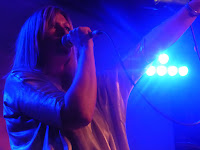 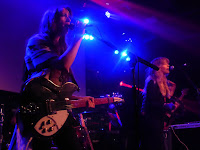 Tonight feels like a celebration, a moment taken aside to celebrate the unexpected success of Jane Weaver's The Silver Globe album, a record that was perfect for its time on release last year and which still resonates with the five hundred people crammed into Gorilla. She's supported by The Sundowners, a band that hasn't yet got the recognition they deserve for both their debut album and the thrill of their live shows.

The Sundowners' debut album is one of the highlights of 2015. Lush harmonies, two very different female vocalists intertwining to create something that has all the hallmarks of classic girl group pop with the contrast between Fiona and Niamh's voices but with a rough rock and roll edge. Live, their sound is a lot harder than the record, mainly down to Alfie Skelly's guitar wizardry and how they, in true psychedelic fashion, often let go at the end of the song, extending them, pumping them full of energy and making them harder.

Their set is a selection of some of the many stand-outs from the debut album, opening with If Wishes Were Horses, Back To You and Into The Light. They celebrate the classic simplicity of their construction, but also revel in the way they seize hold of you and don't let you go. It's impossible to not tap your feet along, sing the chorus along with them and to fall for them even if you don't know them. 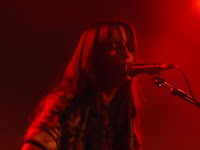 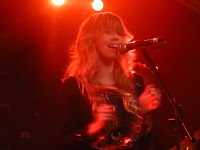 They're recording their second album already and they play two new songs King Of The Road and Great Beat and both songs follow a similar philosophy to the first album but also sound like a band developing their sound, stretching their horizons buoyed by the reaction to the debut from those fortunate enough to have discovered it.

We're puzzled as to why The Sundowners haven't cracked it yet. Artistically they have of course as the album is one of our favourites of the year, but a band this good with an album so powerful shouldn't be playing support slots but headlining venues like this. Their infectious love of what they do is also clear from Fiona's never-ending smile and the intensity Alfie puts into every note he plays and the crowd go from being statuesque at the start to applauding wildly at the end. Their time will come if there's any justice in the world.

The renaissance enjoyed by Jane Weaver in the past twelve months has been a phenomenal one. Her sixth album Silver Globe was lauded as Album Of The Year by Piccadilly Records and she's gone from playing Gullivers to tonight's headline set at Gorilla, four times the size and equally as packed.

It's all well deserved too, as The Silver Globe is a stunning record, a very North West take on a mix of Bjork, Cocteau Twins, Kate Bush and Lush with guitars, electronic wizardry and haunting floating vocals that soar and then dive without pausing for breath. And we see the confidence this brings oozing out of Jane, all that slight awkwardness a year ago has now dissipated and as she outstretches her arm and opens her palm it's as if she's holding us all in it. 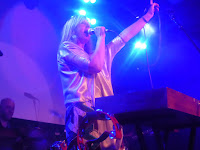 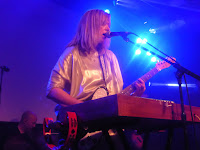 The set is heavily based on The Silver Globe as you'd expect as it's still winning her new admirers and there's plenty here seeing her for the first time although she opens with an older track The Fallen By Watch Bird. The whole album is played as well as the instrumental La Pomme D'Argent off its accompanying mini album The Amber Light which sees Jane pick up the guitar which she jokes is a rare occurrence.

Her band bring the songs to life, whether it's the more traditional bass, guitar and drums or Raz Alluh's wizardry with keyboards, sampling and plethora of gadgetry on the table laid out in front of him. That diversity of sound reflects the album and to a large extent why it's such a compelling record and why it translates so well to the live environment even in a venue that's not built for the atmospherics that the album possesses.

Recent and future singles Don't Take My Soul and main set closer I Need A Connection represent the highlights of the up-tempo phases of the set, but they're at least equalled by the quieter moments such as a rare outing for the emotionally charged tension of Stealing Gold or If We Could Only Be In Love, but the set is perfectly paced and the coherent feel of the album translates well to the live environment.

It's reassuring to see how a record can change someone's fortunes if it's good enough. The Silver Globe is one such record and there's so much love and respect in the room for Jane that tonight feels like a celebration amongst friends old and new.

Email ThisBlogThis!Share to TwitterShare to FacebookShare to Pinterest
Labels: Jane Weaver, The Sundowners