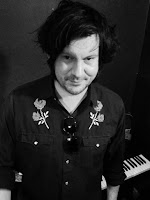 Pete Greenwood released his second album Beauceron last week, seven years after his debut Sirens. We caught up with Pete to find a little more about what he's been up to and about some of the songs on the album and his plans for the future.

Firstly, it's been seven years since your debut Sirens. We thought you'd disappeared. What caused such a long delay between records?

After the release, I was involved with the first Loose Salute album, so I was touring that quite a lot. I was also in The See See for their first two records, so I found myself touring and recording with other bands for a lot longer than I realized I guess.

Once Beauceron was nearing completion I was playing for Starsailor and supporting them on tour, so by the time the dust settled, I was looking at a good five years since Sirens. I figured another year wouldn't hurt much, plus there was a fair amount of upheaval with relationships at the time, and moving back North kind of meant doing things at a slower pace.

And why release it now? Does it still feel like you have something to say?

My friend Bob who runs the Brown Leather Jacket label basically jumped in and said he wanted to release it, which is great. As for the actual songs, they're still relevant to me, and they still make sense listening again. It took so long to write and record that it really isn't indicative of a particular few months, it more covers a five year span if anything. I'm writing much more these days too, there's plenty of things left to write about. I'm still learning the craft of it.

The 88 featured on a split 7 inch with doves on Heavenly a couple of years ago and won a lot of praise from Noel Gallagher.  Did that continued support inspire you on this record?

Definitely I'd say. That sort of reminded me that people actually like what I do. Seems a fundamental thing, but it's really easy to forget that people might actually get a bit annoyed when they know you've all this material, they've no idea when it's out, yet all your Facebook updates are about snooker and the joke of a football team that Leeds have. I'd be mad at me.

The title of the album Beauceron is an interesting one. Could you tell me a little about how that one came about and did the title come before the song of the same name?

I was looking after a puppy with my then girlfriend, so I was looking into getting a dog of my own. I just saw a picture of a Beauceron one day, they're a French hunting breed. I just thought it looked cool to be honest. I never did get one, but I loved the name so I nabbed that, then wrote the song with a vague notion of a big nasty black dog in mind, but it sort of morphed into what it is now whilst I was writing it, the Beauceron ended up being a sense of impending doom or something.

How are you releasing this album?

On Brown Leather Jacket Records, October 16th. We'll be having a launch party on the 21st at The Monarch in Camden, London. It's our old stomping ground so it seems apt.

The lead track from the album is Me And Molly. Could you tell us a little bit about the song?

My ex actually dared me to write a song on the spot, the only stipulation was it had to have Molly in the title, so I wrote the first verse in about 5 minutes then came back to finish it later that day. It's like all the songs in that it starts with a very rigid idea, but tends to end up meandering around subjects but ultimately I might manage to beat it back into some sort of cohesion. I think it worked, my only rule in the end was to do something upbeat but the ennui still seeped in.

Your launch gig is tomorrow night. what are your plans for promoting and touring the record after that?

I'm still booking dates now, a few northern shows, and I'll just see where we go from there, hopefully a few European trips, and I'll be dragging The Arcadians into it for the launch at least.

Pete plays an album launch at the Monarch in Camden, London on October 21st then at The Pindrop in Hartlepool on November 6th.