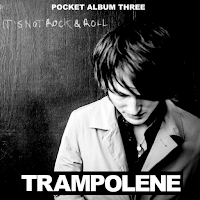 The third in the series of Trampolene's Pocket Albums is set to expand their fanbase with its lead track It's Not Rock And Roll already having secured them radio play, but it's the diversity of the material that makes them stand out (as it did with the previous pocket albums - or EPs as those of us old enough to remember called them).

The first two tracks It's Not Rock And Roll and Concept Lover show the harder side of Trampolene. The former is perfect to get them played on radio as it's a big bold two and a half minute thrash that has more energy and venom in it than most bands can squeeze into a whole set. It starts with sampled vocals hidden behind a fierce guitar riff before the chorus declares "I'm sorry, it's not rock and roll" before the final denouement of "it's just bass and treble." It has Trampolene stamped all over it - the hallmarks of their great earlier singles are all present and correct, but they've got enough about them never to sound the same.

Concept Lover similarly has a riff that announces itself immediately and lifts yourself off your feet. It's a vitriolic rant at how society and the internet allows people to hide behind a lack of personality and something to say - "my concept lover is talentless, can say it all in one four zero characters."

Then the pocket album changes. Front man Jack Jones intersperses songs at their live shows with poetry and one of the most popular ones is called Ketamine and it's an ode to how the horse tranquilizer can be used as a recreational drug. It doesn't glorify it even though he talks of the reasons for taking it, the lift it can give, but also the potential consequences - "take the right amount, avoid mental disaster."

The final two songs are in complete contrast to the first two. No One's Love Like We've Got sheds the loud guitars and replaces them with an understated acoustic and backing vocals as Jack opens with the declaration "our lives are a mess, we should be upset, but we couldn't care less" and concludes "I'm coming out, you know I care." It's a raw open honesty that you wouldn't necessarily expect having listened to their singles.

And that is continued on the fifth and final track Tonight Will Be Fine which is a dark desolate reflection of love gone wrong delivered with an eloquence that marks out Jack as one of the most intelligent, observational vocalists of our time behind the fur coat, poetry and loud guitars - an absolute one-off in a scene increasingly dominated by identikits. It's a Leonard Cohen cover, but it could very easily be mistaken for one of their own.