Track Of The Day 2 : Money - You Look Like A Sad Painting On Both Sides Of The Sky 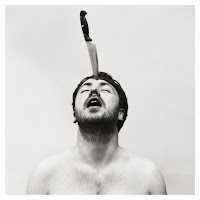 Money are back after what seems like an eternity since their debut album The Shadow Of Heaven. The preposterously fabulously titled You Look Like A Sad Painting On Both Sides Of The Sky is the first studio track to be revealed from their new album Suicide Songs which comes out on January 29th 2016.

Other than some gigs at the back end of last year when they revealed four new songs - of which I'm Not Here, Night Came and All My Life have made the album, they've disappeared, working on side projects as well as Suicide Songs. They've got some low-key dates in a few weeks to introduce the album to us.

You Look Like... feels like a natural progression from The Shadow Of Heaven. It has all that dark foreboding mystery although it foregoes the epic feel of the debut for something a little more disconcerting, on edge, a ball of fragile uncertainty waiting to explode and smother us.