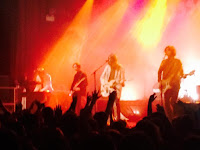 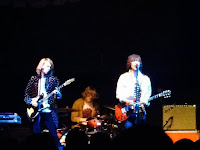 "It's big isn't it?" Tom exclaims as the lights are put up midway through the show. Blossoms are going to have to get used to this. The sold out Ritz show that concludes this triumphant set of gigs around the release of Charlemagne might be their biggest headline set so far, but it feels like a stopping point on a journey. It's been a meteoric rise for them in 2015, but on tonight's evidence 2016, with the release of their debut album, is going to be the year everyone knows their name.

Cupids are a band making a new start. A new name, new songs and a new sound. Whilst they still have an ear for a melody and songs laden with hooks, they're harder and faster than they ever were as Gramotones. Opening track Money is a prime example, like REM's It's The End Of The World on speed or the frantic Horror Draped In Dry Ice that feels like it's got three different songs fighting for precedence in it.

The fact that they have three great vocalists gives them many more strings to their bow as well as they can rotate lead or share it. Their new songs for the new band name have been worth the wait too. Drive is a supremely rich and robust example of this and certainly a contender to be a single with big bold verses, Confession Box shows that they haven't lost their love of three part harmonies and No One Talks About that is a fabulously cutting piece of astute political and social commentary - "society is changing and it's never coming back" - sung mostly by Jake that's dedicated to "David Hameron and his farmyard frolics." They finish with a six minute Corporate Whipping Boy

They get a fantastic reception from an audience unfamiliar with them as this is their first Manchester show under their new name. It was a brave move to ditch their old name and effectively start again, but by wiping the slate clean, they've started with a bang.

Blossoms start meaning business. The opening trio of Cut Me And I'll Bleed, You Pulled A Gun On Me and new single Charlemagne are a powerful statement of intent for a band so confident in themselves that they dispense with three of their best known songs first up. But of course we know already they have the material to allay any concerns that they've shot their load too soon. Madeleine, the unreleased On The Beach At Night and Smoke follow and more than match what's gone before them and the brand new At Most A Kiss shows that there's no let up in the quality of what they're writing now for their debut album.

The audience reaction is breathtaking. Looking around the room, there's people of all ages here, testament to the fact that Blossoms manage to straggle generations, creating something based on the love of what's gone past and fusing it into something that sounds fresh and modern and so very different from the Fray / Turner / McCann apeing gangs. Their songs embed them leech-like in your ears, take the moments during You Pulled A Gun On Me and Smoke where the crowd sing back the instrumental section en masse as an example or the anglicised romanticism of Blown Rose.

They deal with adversity as well. A stage invader makes his way past security and ends up drenching Josh's pedal board in water but they take this in their stride. There's a unerring confidence in Blossoms these days, you can see it in the way Tom has developed as a front man, now all charismatic and cocky without being arrogant, a far cry from less than twelve months ago. They fill the room with their sound too, each band member contributing, vital to the cogs that wheel them along. The crowd is reduced to a heaving mass, beer being thrown and adulation being directed towards the stage.

There's a touching moment where Josh's dad is brought out to accompany Tom and Charlie on piano on the delicate Stormy, from the Blown Rose EP. It shows just how many strings they have to their bow that they can produce something so tender and affecting and deliver it to a crowd of this size. The crowd finish it by singing a line from Oasis' Half A World Away at Tom's behest.  They then play a cover of Electronic's Getting Away With It, which they put their own mark on with Josh's guitars and Myles' keyboard lines reassessing the original.

They close with a huge Blow, the I Am The Resurrection of this generation. As the song draws to its close, they take it up, off and away, closing with Tom throwing his tambourine and hitting Joe in the chest. There's no encore, there's no need because you can't follow that.  A year ago Blossoms supported Inspiral Carpets here and talking to Charlie I told him they'd be headlining here this year and he looked disbelieving. This time next year they'll be in the Apollo and it'll be every bit as triumphant and fully deserved as tonight was.

Blossoms played Cut Me And I'll Bleed, You Pulled A Gun On Me, Charlemagne, Madeleine, On The Beach At Night, Smoke, At Most A Kiss, My Favourite Room, Blown Rose, Stormy, Getting Away With It and Blow.