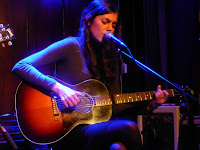 Monica Heldal hails from Bergen, Norway. Already well known in her homeland following the release of her debut album The Boy From The North which finally gets a UK release this week, she has been over playing shows here for the first time. We caught her debut Manchester show and were impressed not just by her songwriting craft, her soft seductive voice, but also her ability to extract both delicate and detailed sounds from her guitar.

Utterly charming from the start Monica's set features eleven songs, eight of which come from The Boy... and three from a second album she tells us she's in the process of finishing. It's a mix of the more upbeat tracks from the record such as set closer I Don't Mind to the softer quieter likes of Follow You Anywhere.

Whilst she's normally accompanied by a full band in her native Norway, she only has a guitarist for company on stage here (who's the bass player in her band) and it means the songs are more stripped back and down than the recorded versions.  This does give her the opportunity though to show off the subtle emotive qualities of her voice, she reminded us in many ways of fellow Norwegian Ane Brun in how her pronunciation in her singing added depth and emotion to the words she's singing but also the mood she creates is reminiscent of Nick Drake, one of her stated heroes. 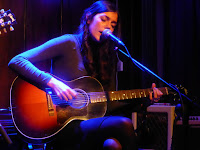 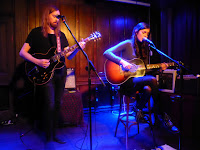 But it's her guitar playing that really stands out. She makes it all look very effortless as she seemingly drifts her fingers up and down the fret board, but the sounds she creates are astonishing for one so relatively young and inexperienced (she took up writing songs at 16 for a local talent night in Bergen for which she had to write a song - and Silly Willy is still in her set even though she now acknowledges knowing how that could be perceived as a title before breaking into a coy smile).

The crowd, save for two who can't shut up, are transfixed by her, seduced by the delicacy and fragility of the emotions that she conveys with words whilst giving little away in her facial expressions. When she tells us this is her first trip, she's immediately told to come back soon by several people in unison and hopefully this series of shows is a toe in the water ahead of a more sustained plan of attack to win over UK audiences because tonight she certainly softened us all up.

The Boy From The North is released in the UK this Friday (9th) and she plays The Islington in London tonight (6th).