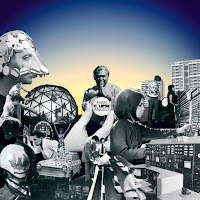 The long lost second album from acclaimed Manchester band Paris Angels is finally released, over 20 years after it was recorded as a free download from their Bandcamp page. Long term fan Stuart Ralston is suitably impressed.

Back in 2012, the surviving members of Paris Angels reformed for a one off gig at a hot, sweaty, packed Ruby Lounge in Manchester's Northern Quarter. The show was a tribute to their friend and drummer, the much loved Simon Worrell. Even The Stars were present and witnessed the adulation and love for the band. Not bad considering they disbanded two decades earlier. Since then, there has been much talk about their long lost second album,the follow up to their seminal debut Sundew.

Eclipse sounds as fresh as ever, despite languishing in the vaults for so long. The songs are sparkling, vibrant and upbeat. Opening tune Shake is a case in point. Grooving with synths, funky drumming and a stomping bass from former Inspirals man Scott Carey, Shake is the perfect reintroduction to the band with Rikki and Jayne sharing vocal duties. It is classic Madchester, as is next cut Sleeping With The Radio On, with the band sounding like the cousins of Happy Mondays, which is no bad thing.

Release sees Rikki Turner on lead vocals. It has a harder edge than the opening brace, demonstrating that Paris Angels were not just one trick ponies. Tough allows Jayne to shine on lead vocals, on a more immediate stomper, which is more akin to some of those early Factory stalwarts.  Door to Summer is a real highlight and guaranteed to get you dancing. Infamous guitarist Wags (later of black Grape) nails it with a simple, repetitive refrain set against multi tracked vocals and more funky drumming from Big Si.

Tracks such as Rise and Dolphins wouldn't have sounded out of place on their 1991 debut. They are classic synth / bubblegum / Madchester pop, in the same vein as fellow groovsters Intastella and World of Twist. On Complete Mind the band almost sound like a forerunner to Black Grape, the band with whom guitarist Wags would score a number one album with some years later.

The album ends with mixes of Shake and Sleeping With The Radio On, but not before the electrifying post punk classic Stairs To The Sun makes its presence felt. There is a lot to like about Eclipse. It is as good as, if not better than their debut. Wrongly labeled by the London media back in the day, this fine album cements their reputation for those of us in the know and it should be embraced by new fans too.

There was always more to Paris Angels than Perfume and Eclipse shows us that. The band are rightly proud of their roots and their city and they wear their influences on their sleeves. Eclipse is a welcome addition to their small but perfectly well formed back catalogue.

Can we have a radio sessions LP next please?

Eclipse is available as a free download from Bandcamp.