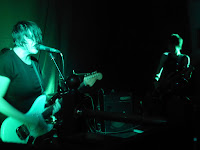 It's been over six months since LIINES' last Manchester show even though they all live in the city. They've been off around Europe playing to big crowds, but they're back home now and planning an assault on their home town. They start off in fine style with a fierce headline set at Scruff Of The Neck's monthly Royal Oak night in Chorlton.

LIINES are the fiercest, rawest band in town. With just guitar, bass and drums they create an unholy ferocious sound across the twelve songs they play. The base nature of the tools at their disposal belies the sonic earthquakes that hit from the core of each and every song they play. Twelve songs in thirty five minutes tell its own story, there's nothing in the set for show, no posturing, no unnecessary fluff, everything in there is designed to blow your head off and that's exactly what they do.

Of course, it can't just be about making as much noise as possible and this is where LIINES come into their own. Despite the sheer scale of sound they generate, there's a subtlety to them that most bands could only dream of delivering. The tightness that comes with having played together for years is very much in evidence as songs like I Almost Miss You, Be Here and Cold, despite each coming in under three minutes, have so many ideas, changes in pace and direction in them that are absolutely seamless that a lesser band would have no hope of achieving. 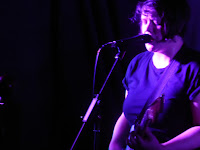 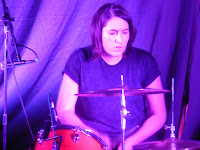 Whether it's the metallic driving drums of Leila, Zoe's deep and dirty guitar sounds and her voice straining to steamroll its way through to get itself heard or Steph's rhythmic dancing bass lines that make this something that wouldn't sound out of place on the radio, LIINES create something that it's impossible to ignore. From those of who are in the know to those who are experiencing the epiphany for the first time the reception they get at the end of each and every song grows as the set progresses. They play twelve songs which could make up a perfect debut album without ever dropping the quality of it remotely. They don't say much, there's no real need to, and Zoe needs to get her breath back after every three minute tsunami, and all dressed in black they're all about music rather than any image. 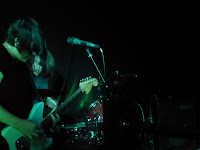 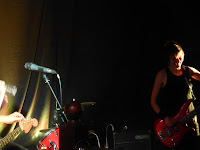 The only real contemporaries you could point to for LIINES are PINS and Sleater Kinney in the way that they create something much bigger than the sum of their parts and put their male contemporaries to shame with the sheer power that they generate. But LIINES are darker, the songs talk about loss, anger and a little bit of bitterness. They remind us of the much-missed Solar Race in parts. Witness Zoe screaming Liar, from the self-released EP, and feel the ferocious intensity of it blast you in the face.

There's something very special going on here. A band that doesn't stand on niceties, doesn't try to impress you in the slightest, they just do what they do and they blow you and everyone else in your vicinity away with it.