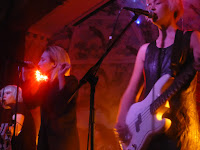 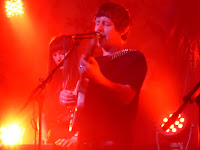 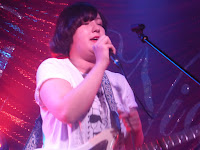 Touring in support of their summer album Wild Nights, PINS made a triumphant return to Manchester following months of globetrotting to promote the album. They've come back a changed band, more powerful, direct and in your face than ever before. Support came from the magnificently titled Peace And Love Barbershop Muhammed Ali and Kyogen.

If we're being honest, we weren't holding out much hope for Kyogen's set without having heard anything by her. We assumed band member solo project on the bill because of who she was and that's never usually a good thing. But we were very very wrong indeed and delighted that we made the trip to the Deaf early to catch her. With the use of a drum, guitar and a series of looping pedals with a backing track, Kyogen created stunning atmospheric songs out of nothing, including a Kate Bush cover that we didn't recognise, and her voice matched perfectly the mood that her music was creating. Extremely organic and devilishly simple in its execution, uncannily addictive to listen to once the loops got into your system it was the perfect opening to the evening. 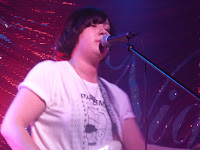 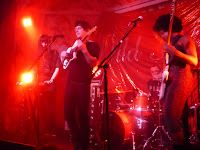 Next up were Peace And Love Barbershop Muhammed Ali, the new project from Mark from Brown Brogues. This four-piece features Mark on guitar with bass, drums and keyboard and a two-man two-woman line up that works both visually and in the sound that they create - think Brown Brogues but with keys and bass filling out the songs and smoothing down the more abrasive surfaces. Still with a punk element burning in its soul, PALBMA fuse punk with something resembling funk in parts. There's no introductions and no song titles, but they play the two songs they released recently on Stolen Body's Vegetarian Meat Vol 2 (Hollow Bones and Gave My Heart Away) as well as three (Mean Like A Snake, Lord and Rope) from their forthcoming split EP with the equally wonderfully titled Druggy Pizza. As they finish last song Yeah! Mark leaves the stage first, followed by the drummer, leaving just the keyboard player and bass player and then just the bass player to finish the set with a solo. 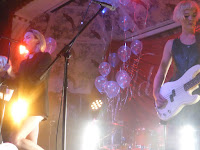 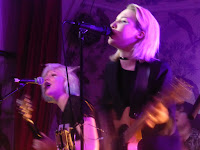 It's six months since we last saw PINS at one of their album preview shows and then supporting Sleater Kinney and right from the start we're astonished at how they've blossomed in the time since we last saw them. They've always been a great live band with an effusive raw energy that they haven't quite managed to capture consistently on record yet, but tonight they take this to a whole new level completely. There's an aggression to their sound these days, the ability to let rip and take our heads off with the sheer ferocity of the noise they're creating. Take Oh Lord for example which jumps and stop starts, melodic one minute, a tsunami of white noise the next, yet making perfect sense.

They look like they're having a ball too as the incessant immovable grins on their faces show. Faith goes face to face with Lois then Anna, the spring-heeled Lois who can't stay still all night shares Kyogen's mic for a couple of songs.  Not to be outdone, Sophie on drums, the foundation for this transformation into noisenik angels, spends half the gig playing stood up. Faith ventures down into the crowd for Girls Like Us at the end of the set and returns to the stage with an entourage of women that she'd insisted earlier came to the front and danced and the song segues into a section of Cyndi Lauper's Girls Just Wanna Have Fun before they finish off with a cover of The Misfits' Hybrid Moments. 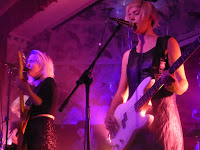 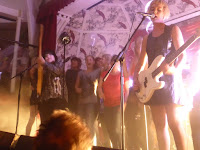 The set naturally draws heavily from Wild Nights with most of the album being present and correct. The singles Too Little Too Late, Young Girls and Dazed By You still retain those sparks of pop sensibilities that always lie under the surface of PINS songs, particularly in the way Anna and Lois' backing vocals entwine with Faith's, but with this much harder edge to them. LUVU4LYF, the early single that was the first sign that we had a special band on our hands, and the tracks from their debut LP Girls Like Us are impacted similarly.

Something has happened to PINS this year and the transformation is palpable. Like grinning assassins drawing you in with their stage full of balloons, they are, along with fellow all-female LIINES, the band that rock the hardest in town. They're also conscious of the fact that they are trailblazers in an industry that still suffers in huge swathes of the idiotic notion that women shouldn't or can't play guitars loud. If anyone needs inspiration to pick up a guitar and form a band with your friends and have a ball doing it, the unquestionable brilliance of PINS is it.