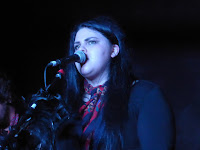 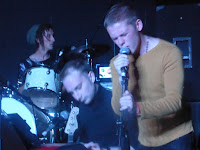 Sound Control was the latest venue in White Boy's tour of Manchester venues over the past few months supporting the release of their excellent debut album Glitoris. Support came from Sheffield-based four-piece Bang Bang Romeo.

We've heard good reports about Bang Bang Romeo from friends in Sheffield and this is their first show in Manchester for some time so we're intrigued to see if they live up to their growing reputation. The good news is they absolutely do.

A band not afraid to look different and stand out from the crowd, Bang Bang Romeo are blessed with a singer that demands your attention in Anastasia Walker. Whether she's letting loose a howl to hammer home the message of her words, prowling the stage purposefully egging on her band mates or down on the venue floor amongst us, she's absolutely captivating to watch and to hear. Her impressive vocal range allows her to belt out the hardest of lines and sweep effortlessly into something more tender and emotional. 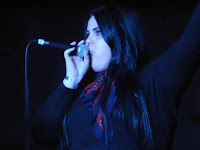 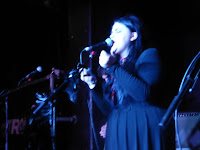 Anastasia is the inevitable focus point of the band, but that's not to diminish what her band mates bring to the party. They create the spinning whirlpool of noise over which she works her magic. There's big guitar solos that are not afraid to flaunt their love of rock and roll and which feel like they're about to veer into overblown territory but tiptoe along the line and remaining thrilling and on the edge.

They dispense with recent single Johannesburg early in the set as if they've got bigger and better things to bring to us. And in Adore Me and set closer Invitation, they do. They're not afraid to get the audience to sing back to them too, always a brave move for a support band, but it's that infectious energy that they create that actually makes us do it. We loved them.

White Boy's debut album Glitoris has been around for a few months now and has won universal praise for its fusion of many different styles into a coherent consistently challenging record that never stands still and their live shows to date have been no exception.

They almost stumble into the first song as the between sets music still rumbles over the first few bars of Rock On, their brave bold cover of the David Essex standard which brings glam rock right back up to date in 2015. If you're going to do a cover, you need to make it your own and White Boy set down their marker. 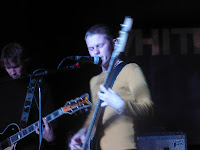 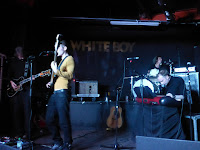 They then run through the majority of the album in its finery. Joe tells us at the end to buy the album as it's special and whilst not displaying a great deal of modesty in that statement he's right. Brass collides with guitar and the drums dictate both the pace and rhythm of the songs from the mad three minutes of Ripped Knickers, the adrenalin-filled rush of first single Kiss And Run, the dramatic mood changes that run through 100 Degrees, the Queen-inspired album opener Mama through to the widescreen made-for-arenas-but-still-cool expanse of Starchild.

For a band still in single digits for number of shows, it's an impressive and wide-ranging armoury of songs and a set that never stands still in one place. They make great use of three sets of vocals to emphasise the impact of the songs and the way keyboards suddenly change into brass merely acts to the triumphant impression that they leave behind.

Quite where they go next will be interesting as the album is already out there so there's not much in the way of mystery in the setlists for now, but White Boy are a unique, challenging live act, full of grand ideas and schemes and delivering on them.