Track Of The Day : Delamere - Heart 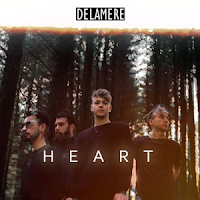 Forthcoming single Heart, due out on October 9, is the first taste of Delamere's debut album due for release in early 2016. It's a big bold statement of intent from the Stoke four-piece ahead of their Ramsbottom Festival appearance and October UK tour in support of its release.

Although it's a re-recording of an early track, what Heart does is show how far they've developed as a a band in a short space of time since their Bright Young Things EP. Buoyed by an increasingly positive response to their live shows not just in their adopted Manchester but further afield, Heart is the sound of a band full of confidence, not afraid to sound big and bold and managing to do it without squandering any of their intimacy or having to resort to tired rock star cliches. There's hints of the Radiohead that most people fell in love with around the time of The Bends in there but it's more in terms of scope and sonic ambition, but Heart is very much their own sound.

After playing Ramsbottom Festival this Friday, Delamere go on tour to support the release of Heart with the following dates :