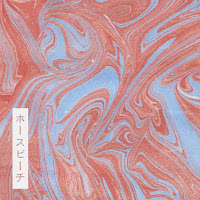 II is the second album by Manchester's Horsebeach, aka Ryan Kennedy, following on from last year's self-titled debut album that was a word-of-mouth hit around the city. Lovers of that album won't be disappointed by his new one; it retains many of the same attributes that made us fall in love with it.

The album starts with an instrumental entitled Intro and immediately the guitar sound that characterised the debut album is again in evidence, giving the listen a warm, fuzzy glow. It both feels familiar, but other than a nod to the melody of The Smiths, it's also not quite like anyone else.

It's Alright features Elizabeth de Cent duetting on vocals in the chorus which makes for an interesting contrast to Ryan's dreamy vocals yet still feels like a song immersed in bed sit land. Although Matt Booth plays drums on a number of tracks, the rest is written, recorded and performed by Ryan and we suspect George Street Studios might well be his flat as pictured on the inner sleeve.

Like all great bedsit records, II is doused in a sense of melancholia. There's a painful "my heart cannot cope" in Andy, whilst Broken Light finishes with an exclamation that "and I feel like I'm caving in" and this tone runs through the record. However, it's the beautiful melodies and simple but infectious guitar hooks that lift us out of the doledrums and stops us feeling sorry for the subject of the songs.

For a record made with such meagre means, II feels both intricately complex as if Ryan has pored over every detail of every bar meticulously so that not a single note is wasted yet does this. Take the haunting Let You Down, dripping with emotion and pent-up angst yet those harmonies hint at an optimism lurking underneath the surface.

Side two opens up with Midnight Part 2, an instrumental. It'd be folly on most albums, but here it's entirely fitting in with the mood. Shorn of the yearning despair of the lyrics, it highlights the delicate nature of the work we're listening to. It's the best soundtrack to a movie that's never been made.

The rest of the album is more of the same, without actually sounding the same. Dana tells the tale of a woman who "wears an over-sized sweater to hide her over-sized heart" whilst Matt Booth's contribution on drums sees Disappear drift from the luscious melodies of the first half of the song into something darker and more claustrophobic as it reaches its destination. Clouds points to the head down hair shaking indie discos of the late nineteen eighties before the cool kids come in as if The Cure of that period had been transported forward into the here and now untainted. Avoid The Light completes the album and hints at something more expansive, again the drums impact this, to come on the next record, whilst remaining true to the engaging spirit of what's gone before.

II, like its predecessor, is a record you'd never tire of hearing over and over again. It's not a record that imposes itself on you, it sits there coyly unaware of its immense beauty and seduces you with its mystery and modesty until you've fallen head over heels.

They play Manchester's Night And Day on October 15 supporting Vetiver and headline Band On The Wall on December 17.

Email ThisBlogThis!Share to TwitterShare to FacebookShare to Pinterest
Labels: Horsebeach