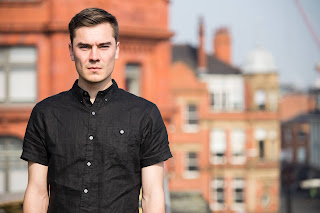 Ahead of the launch of Liam McClair's new EP Honest with a show at Gullivers in Manchester next Friday, we tipped the title track on Shell Zenner's show on Amazing Radio today. Liam very kindly agreed to answer a few questions for us and tell us a little more about himself and the record.

First of all, can you tell us a little bit about yourself and how you got into music?

I am a folk pop singer- songwriter based in Manchester.

I have always played music from a young age, my Mum encouraged me and my sisters to have lessons on piano initially, then I had a brief stint on the trumpet and at fourteen I settled on the guitar.

I started off learning covers and singing in my room, then it naturally progressed to performing. I played a handful of gigs between 17-21 at school and University and I was writing the whole time. It wasn't until my final year at University in Liverpool where I really started gigging regularly and promoting my music. A track I recorded at University was played on BBC Introducing Merseyside and I played Liverpool Sound City within the first 4 months of regular gigging and this instant validation from well-respected sources has made me seek out more and more success. I moved to Manchester and I have been playing here for the past 3 years.

Unlike most singer-songwriters, a lot of your songs are quite positive in their outlook. What inspires you to write?

When I first started all my songs had a relatively sombre tone and were quite slow. I had a lot of people saying they are good but it's important to have a contrast. I think it's self-fulfilling if you sing positive words and phrases regularly, it will make you feel that way. I suppose there is an element of a mantra around it.

Also I think I am a positive person so it is a reflection of my mood at the time. In terms of inspiration initially it was love and longing but I am trying to write about different topics. Most of my songs are expressions of personal experiences and provide a catharsis to me for issues I've previously had.

I've always tried to write about a variety of topics as it helps to expand your inspiration and capabilities as a writer.

You've done a few live shows in unusual places recently (on a rooftop in central Manchester and on a barge), how did those come about?

I had a photo shoot on the rooftop where the gig was held and it started as an offhand comment of ‘It would be great to do a show up here’ and then it snowballed into reality. I also think guerrilla shows or shows in unique places are becoming more and more popular and it showed by the gig selling out really quickly.

Once I did the rooftop show, my manager Ben was keen to play another interesting location and hence the barge. Both gigs were really special as it gave the audience an experience outside of just the music and it created a novel memory that can be associated with my music. No doubt we will continue to play in interesting places.

Could you tell us a little of the story behind Honest, the song we're featuring on Amazing Radio?

I was in a long term relationship from 16 to 21 and during that time I changed a lot as I matured and one of my social issues I had was confusing honesty. I thought that the only way of being honest was in a cruel way and because I had this attitude around honesty I ended up lying often in order to keep people happy.

When I looked back and reflected on my behaviour around that time I found that it was honesty that would have made my life a lot easier. Therefore the song, Honest, is about my road to finding that honesty and saying that it is OK to be honest. I think being honest with someone can help you to become a lot closer and it’s something I am trying to continue.

And the other songs on the EP. Alchemy has a particularly intriguing back story doesn't it?

Yeah, Alchemy is about my interpretation of Paolo Coelhos novel The Alchemist. For those who haven't read it, the book discusses the nature of chasing your dream and I was given it by my Mum as I was performing regularly and feeling somewhat disillusioned with my progress. It's really helped me to find a new perspective and created musical inspiration.

Someday is a track all about having faith in there being someone out there who is a match for you. I was falling into age related cultural pressures that I should have X amount of years in a relationship and I don't think it works that way. So the song is my love letter to my soulmate where ever they are!

The last track on the EP, Oh Mary, is all about reflection. I tried to look at it from the perspective of regrets, loss and unresolved business.

The EP is recorded with a full band whereas your previous material was solo - why make the change now?

I have always wanted to have a full band and I think it adds a lot to my songs. I still think they are good acoustic, but with a band they will reach a wider audience. Also with a band you can make a bigger noise at shows and create a better experience for the audience.

Does this mean your live shows will now be with a band or will you continue to play solo shows as well?

I am very lucky to have the option, starting out solo means if I need to play solo I can or if a bigger show comes up I can take the band. I think it will be good to do a mix as the audience will be able to see different aspects of the same songs. I still enjoy playing solo.

Your EP launch show is at Gullivers on September 25. What can we expect from the night?

It will be a busy evening filled with acoustic acts and fantastic spoken word.

Tom Kwei is a wonderful poet who compered/performed in-between each act at my last launch and it made people stay in the room and created almost a pallet cleanser for the crowd's ears so they were ready for the next up.

I've got Jonny Woodhead starting things off and he is a brilliantly insightful writer with a really soulful voice.

Main support is Robbie Cavanagh with his band. Every time I see Robbie play I am impressed by something new, he's a brilliant artist.

Then I will finish off the night and it will be a chance for people to hear me live with a band for the very first time! Expect some singing along

Finally, if you had to describe your music to someone who hadn't heard it before, where would you start?

I think I make honest Folk Pop that is relatable, catchy and enjoyable. I set out to try and give the audience an idea of my inspirations for tracks and then they can come on a journey with me through the verses and lyrics. I'd say if you are a fan of Paolo Nutini, James Taylor and Bill Withers you would like me. I really admire those artists so try and create similar music to them.

Honest is out on Friday 25th September and can be pre-ordered here.