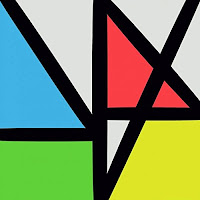 Music Complete is New Order's first studio album proper in ten years. A lot of water has passed under the bridge since then including the acrimonious departure of bassist Peter Hook. Laden with guests and focusing more on the dance floor than rock poses, it's unmistakably New Order throughout yet brought right bang up to date.

With all the turmoil around the band since 2005's Waiting For The Sirens Call, a new record could have been kept well off the agenda to avoid tarnishing the band's decades-old catalogue with something that didn't quite hit the mark, but like so many of their Mancunian contemporaries who've come back in the past few years there's an inbred need to create new music, if only to keep it all fresh for them rather than churning through the hits one after the next. And, with that in mind, it's no surprise that Music Complete is one of their finest albums to date, by no means perfect like all New Order albums, but with enough brilliant moments to thrill the hardcore and with a continuity and sense of purpose that piques and holds the interest of the more casual fan like us.

Music Complete isn't an album that you can dip in and out of. It's best listened to, in its 66 minute entirety, in one sitting rather than piecemeal. Like so many great albums, the beauty in it is that there isn't a real stand out track nor is there a weak one, but songs that fit together perfectly and consistently from start to finish. They haven't made a record this focused since probably Technique back in the 1980s.

What's immediately evident is that keyboards and synthesizers have won out over guitars in the making of the majority of this record, which should come as no surprise given the return to the fold of keyboard player Gillian Gilbert. At times the balearic beats belie the age of the band yet remain true to their roots and, with the help of The Chemical Brothers and super-producer Stuart Price, they have made a thoroughly modern sounding record. The album is laden with guests too, from Elly Jackson of La Roux providing backing vocals on a number of songs, Brandon Flowers on Superheated, and most evident of the lot Iggy Pop taking over vocal responsibility on Stray Dog and making it feel the soundtrack from a Tarantino movie. There's also some luscious string arrangements by Joe Duddell.


There's a soft hue to Bernard's voice throughout the record, whether it's softened with age or down to production trickery, it feels warmer and more seductive than its ever done right from the start of opening track and lead single Restless. Never the most celebrated of lyricists, he keeps things simple on lines such as "I want a nice car, a girlfriend who's as pretty as a star" on the aforementioned Restless or "it's official, you're fantastic, you're so special, so iconic" on Plastic and it works because we're not expecting and never have a thesis on the meaning of life and death from him. The words on the album are often incidental to the mood and atmosphere that's being created.

The album is being released as a vinyl box set with mixes of each track on it and every track is rife for revisiting, restructuring and the dance vibe undercurrent transforming into floor fillers. Take Plastic for example, it's a song with several segments that could come from different songs, but which fit together seamlessly as it moves from one through another and then back to the start before diverting on another tangent to its close. Unlearn This Hatred employs a similar modus operandi - a glorious pop verse and chorus forcing its way to the surface contrasting to the pulsating beats that kick in at various points. It's a trick they pull off in a number of places and pretty much always, some ill-advised sampling on Tutti Frutti amongst an uplifting glorious Jackson-accompanied vocal excepted, achieves the desired effect.

There are tracks on here that wouldn't feel out of place in the more exalted company of their back catalogue. If we were forced to pick stand out tracks, Jackson's vocals combined with a majestic shuffling electronic groove would make People On The High Line a contender as would the uplifting Academic and Nothing But A Fool, where the guitars finally make their voice heard.

We didn't expect to be this impressed by Music Complete. We thought we'd get a half-baked attempt at recreating past glories, but it's almost a two-fingered salute to those departed that they've produced one of the best records of their career. Not afraid to look back for inspiration but putting a modern twist on it and making a record that would be celebrated from the rooftops were it produced by the press's brightest new things.

It's been ten years since Waiting For The Sirens Call. It could quite easily have been just ten minutes. Plus ça change.