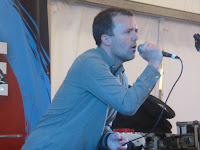 The Manchester Food and Drink Festival always has an excellent selection of bands and solo artists playing for free in the tent in Albert Square and this year has been no exception. Thursday night saw The Slow Readers Club headline the tent with a stunning set that spanned their two albums and undoubtedly won them a set of new admirers.

Yet another The Slow Readers Club review we hear you groan. Well, in the T+C of the blog, it states “We will go on and on about certain bands we love.  We'd apologise for that, but we wouldn't mean it” so here we go.

Starting with Sirens from their debut album, they run through selected highlights of that record – One More Minute, Feet On Fire – as well as most of this year’s Cavalcade. What makes them stand out so much, other than the quality of their songs, is that they have a consistent sound and a style that is unmistakably them, but they achieve this without two songs ever sounding the same. They do the big anthems, brooding epics as well as more reflective considered songs yet they all have their inimitable stamp all across them. It’s a trick few bands can achieve without sounding contrived or suffering from huge variations in standard.

Aaron Starkie has developed before our eyes in the last two years into a confident, strident front man and the band behind him tight and in a groove, David Whitworth’s drums providing the incessant insistent framework for Jim Ryan on bass and Kurtis Starkie on guitar to deliver the groove that makes their songs so irresistible. Like all great bands, there’s an intuitive chemistry between them that flows through the set and whilst most bands suffer from a lack of quality and an inability to keep an audience’s focus once they go past the standard 30 minute slots of the circuit, The Slow Readers Club positively blossom with the extended set times.

Those songs from the first album have broken free from the shackles of the sometimes claustrophobic production and One More Minute in particular feels like it should have a field of thousands chanting the chorus back at them. The hardcore in the tent do a good job of this including a gentleman who installs himself on the stage (something that’s become a habit at their shows).

It’s the songs from this year’s Cavalcade though that really stand them out from the pack – it’s a record that feels like a singles collection or a greatest hits, all peaks and no troughs.  You can reel them off – Forever In Your Debt, Start Again, Don’t Mind, I Saw A Ghost and Plant The Seed are the five singles they’ve released from it and in Days Like This Will Break Your Heart they’ve got a song that possibly tops even them. Each of them are delivered true to the recorded versions, but with a power and a compelling sense of purpose that makes them feel even bigger and more expansive than the record. 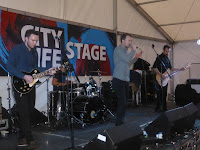 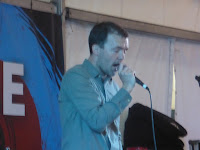 As they finish the set, the whole of the tent and those outside break out into rapturous applause and an unplanned encore is demanded. Whilst some of us were there specifically to watch them, including a man who has come from Italy for tonight and their slot at Ramsbottom Festival on Saturday, the majority probably weren’t, but were won over as evidenced by the very brisk trade in cds and t-shirts once they’d finished as well as people asking who they were as the set progressed.

Manchester has a history of great bands that never get the acclaim they deserve whilst others less deserving of it make headlines. Whilst it’s hoped that might change with their forthcoming tour and the bigger venues they’re now playing in town it’s far from guaranteed. And that’s a travesty because The Slow Readers Club are the best band in town at the moment.

The Slow Readers Club played Sirens, Start Again, Here In The Hollow, Days Like This Will Break Your Heart, Don’t Mind, I Saw A Ghost, Forever In Your Debt, One More Minute, Plant The Seed, Feet On Fire, Know The Day Will Come and Fool For Your Philosophy 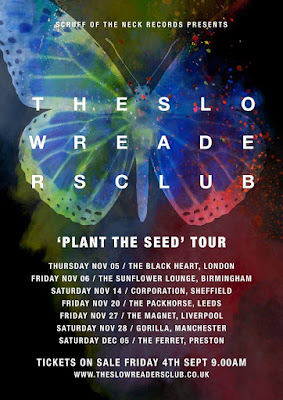