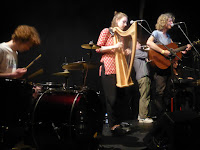 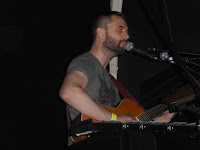 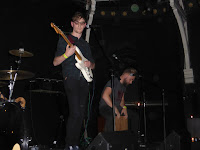 The theatre room in Kings Arms in Salford was the beautiful intimate setting for Johnny Sly to reveal the five songs that make up their forthcoming EP and impress an attentive seated crowd. Support came from solo artist Minute Taker and duo Hertha / Hames.

Billed as a solo artist Hames, the show is opened by a duo - the last minute addition of a cajon drum box and a change of name to Hertha meaning that the assembled crowd is witnessing a debut gig. With a simple set up of acoustic guitar and the cajon, there's a lot of space for the instruments to fill, but what they do is create eerie atmospherics as the echo of the drum complements the quiet strum of the acoustic guitar.  They play five songs, including a cover of MGMT's Kids, that mark them out as a duo to keep an eye on. Lyrically, they're also quite pointed and detailed, the penultimate song Fury talking of breaking heads open and boring out insides, suggesting we might have an act here to keep an eye and ear out for. 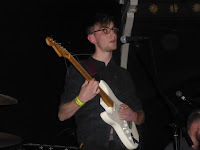 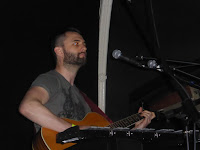 Next up is Minute Taker. His solo set is an intriguing mix and contrast. He uses backing tracks as well as loops to create his songs, but it's the more intimate parts of his set when it's just him and keyboards or guitar that's most impressive to us. Mid-set he plays a cover of his musical heroine Kate Bush's Running Up That Hill, which is an extremely brave move but one that he pulls off with aplomb. His closing track My Electric Wire is dark and claustrophobic and the highlight of his set for us. 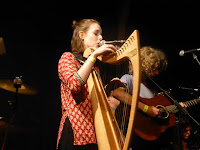 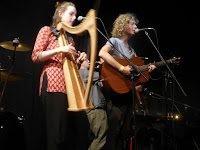 Headlining are Johnny Sly. Normally playing as a seven-piece, there's only five of them tonight, but between them they create a fascinating range of sounds that make up the six songs of their set, five of which are from their forthcoming EP. Vocal duties are primarily shared between guitarist Jonny and the breathtaking Celtic-tinged tones of electric harpist Rosalie and keyboard player Aeve and the contrast in styles is striking and part of the reason why Johnny Sly are such a fascinating proposition live. Add to the that the electric harp itself, a massively underused instrument in my opinion, and a trumpet that is central to the sound as well as songs that seem to last an eternity but with different sections that could form songs in their own right and that's Johnny Sly. Drums clash with the harp and guitars whilst the keyboards dance merrily underneath the Pied Piper call to follow of the trumpet - the songs swoop then rise Lazarus-like and then fall back down. Each song feels like an opus in its own right as they run through all five tracks from the EP plus Stitch from their last release.

Before they start the final track, a gentleman at the back interrupts Jonny and tells him that he has to leave for his last bus, but that they should keep doing what they're doing because it's something special. As gig interruptions go, it's an unusual but welcome one and one that the rest of the audience crammed in round tables responds to. As their final song Remember takes things to even more dramatic highs and lows and comes to its end with Rosalie losing herself in song. In a world where folk music is an ugly word given the associations with the likes of Mumford And Sons and a million other banjo-toting check-shirted wannabes, Johnny Sly create something of the earth, completely natural yet infinitely complex and diverse. The guy should have got a cab home.