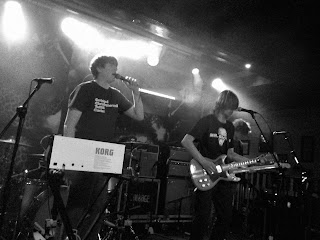 Cabbage's Healing Brexit Towns Tour storms into Dunfermline for an explosive show. Stuart Ralston and a buoyant Fife crowd have a ball.

Having headlined the legendary Ritz and supported the Courteeners at Old Trafford in their home town of Manchester recently, catching Cabbage in the intimate PJ Molloy's is a real treat. We've commented before that PJ's puts other Scottish venues in the shade and their reputation goes from strength to strength. The set up is excellent and Cabbage flourish in this environment.

Opening with Fraudulent Artist from the excellent new EP and the crowd are completely engrossed from the off. The youngsters in the crowd form a moshpit whilst the older generations attentively sing along from the sides. Cabbage manage to reach out to different generations with their politically charged tunes that are already reaching classic status.

Necroflat In The Palace sees band and crowd shift it up another gear. An unlikely anthem, the “I Was Born In The NHS” chorus resonates around the venue. As Eoghan, Stephen and Asa slow it down, Lee and Joe duel on vocals before winding it up again. Cabbage might be dismissed as a one trick pony punk band by people with agendas but they are a tight, intuitive unit who feed off each other with ease. Making music first and foremost for themselves, Cabbage are uncompromising. They now have a wealth of material as is evident by throwing Necroflat into the set so early.

Fickle follows. Stephen's bass dominates and Fickle has more swagger than the Pistols at their finest. Terrorist Synthesiser goes down a storm with the crowd, indeed many know the words of every song presented tonight.

Anti privatisation song A Network Betrayal has shades of Joy Division yet retains a contemporary edge. Kevin is one of many highlights in a set packed with them. It's Grim Up North Korea slows the pace down before a singalong Free Charles Bronson. Leaning towards T-Rex, it is simply delightful and the band are having a ball, playing for fun.

The incendiary Uber Capitalist Death Trade ends the set and despite calls for more, there's no encore. Cabbage keep the crowd wanting more. We don't get Dinner Lady unfortunately tonight but what we do get is lapped up by the eager crowd who simply adore Cabbage. Their ascent continues, playing by their own rules with an impressive, inspiring, commanding, uncompromising back catalogue.