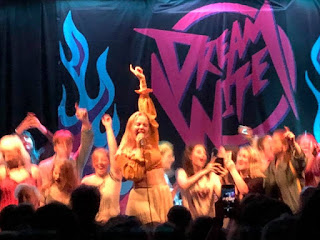 Dream Wife's long-awaited Manchester return at Band On The Wall threatened at times to descend into chaos after two stage invasions and a ten minute FUU, but their control of their crowd and the incredibly positive vibes that they create meant that there was never any danger of things getting out of control and the gig became a celebration. Support came from Pearl City playing their first ever show.

Pearl City seem immediately familiar and that's not surprising as they are a new incarnation of much-loved underground act Bernard and Edith. There does feel to be a new-found purpose and direction though during their six-song set that goes hand in hand with the name change. Greta still has those dramatic movements and with these songs, in particular debut single Flames and Second Chance, they're perfectly atuned to the music that Nick is creating. The songs are uplifting, progressive and hold the audience's attention as Greta moves gracefully from one side of the stage to the other. Let's hope the new name and the new start helps them finally get some of the recognition they've worked so hard to achieve and very much deserve. 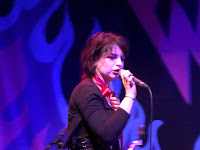 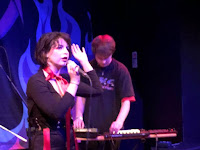 Dream Wife are frankly astonishing. It's hard to believe that they started off as a bit of an in-joke, pretending to be an art school project band, because tonight their set is one of the fiercest, most fuck you shows we've seen all year. It's a mixed audience from young women for whom these songs mean the world to older men like us who see a real devil-may-care spirit in them that's lacking in so many bands that lay claim to be punk or rock and roll. They start by tossing in Hey Heartbreaker, a brilliant collision of punch to the gut guitars with the sweetest harmonies laced with a wicked sense of mischief in Rakel's delivery. Their bass amp blows so she starts to talk to members of the audience, and what's noticeable here, as it is later when they're signing merchandise, they care, they know the names of people in the crowd and address them directly. It's that relationship that Dream Wife foster that allows them to build on their growing collection of great songs and to create a real gang mentality and sense of community, no more so than when Rakel dives head first into us and crowdsurfs during final song Let's Make Out.


Recent single Fire is casually thrown in three songs into the set, but they've got better to follow it. Kids is a raucous rumbustious assault on the senses, but the way Alice and Bella bound around the stage, it's a million miles more fun than you could imagine. They've got a serious message though, stopping before Someday to dedicate to their "bad bitches who deserve to be heard, who deserve justice" in response to the raft of revelations of predatory sexual assaults on women that are growing by the day. It's a simple direct message to any man who has a sense of entitlement and one that's delivered with venom and without any room for misunderstanding.

FUU has similar intent running right through it. Rakel demands a space is cleared at the front and that the women take their space and know how powerful they are. A group storm the stage where they remain until security ask them to leave (we understand they're worried about expensive equipment, but this was a celebration not a riot) and the gang of three on stage become a gang of twenty for a moment of unity, heightened when they mash Spice Girl's Wannabe into the mix and then tell us what they really really want is to fuck us up. At the end Rakel tells us that the song lasted ten minutes but this song never stops.

It's a year since we first saw Dream Wife and in that time they've developed from a band that was still learning its craft into one of the tightest, hardest and in your face teams out on the road. They're fiercely protective of their own and those that support them, but you know they're not going to take any shit off anyone. The songs aim for the weak spots and hit them hard and repeatedly, exhilarating in their precision and delivery. They're more about message than pop tones and whilst that might hold them back compared to, say, the likes of Black Honey, Dream Wife are the real deal.

They played Hey Heartbreaker, Lolita, Fire, Right Now, Love, Kids, Somebody, Everything, Act My Age, FUU and Let's Make Out.