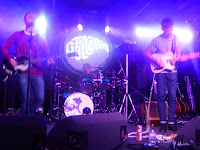 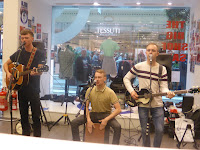 The Gallerys made their Manchester debut on Saturday and Sunday with two contrasting sets in very different venues. On Saturday night they opened up for Pinked Floyd at Academy 3 before a more stripped-back semi-acoustic set in the Lambretta Store in the Trafford Centre on Sunday.

It's an interesting support slot for a first visit to Manchester, but with the confidence that The Gallerys exude right from the start and throughout their set, you can tell that they're already accomplished enough to trust their songs in any environment. It's a justified confidence too as these songs are the sort that you feel you've known for years by the time they reach the end of them, such is the immediacy of them. They're the sort of songs that you could imagine big crowds singing back to them, and they're delivered with a.cheeky grin and a glint in the eye that tells you how much fun they're having playing up there rather than being all dour and glum.

The title track of their recent EP Paisley and Imperfect Perfection were known to us before the set, but it's the other songs that have us thinking they've already got three or four more singles in the locker that will draw people in and make them fall in love with them. See, My Heart Is Sold, It's Up To You and in particular Over The Bridge all scream radio-friendly single at us, whilst Doctor Friend, sung by drummer Dan, shows that they've also got the ability to deliver something that's a little different.

James takes on lead vocals, but some of the songs are also led by Craig, something that helps to keep their set fresh and varied. It's a rarity for a band to have three vocalists who could all lead the band and combined with their very obvious technical ability (demonstrated in the way they cover Blur's Parklife) and the way they've crafted earworms, the assembled Pink Floyd fans are impressed and by the end the reception tells them and us that it's mission accomplished and a potentially awkward introduction to Manchester has been passed with flying colours.

The second show is another interesting choice, but one that's even more successful than the first as they draw in shoppers in the hellhole that is the Trafford Centre on a Sunday. It's a stripped down set with Dan on a cajon and James with an acoustic guitar, but the impression they leave is no less substantial as music-loving passers-by come in and stay for the rest of the set. They cleverly mix in a few more covers, as you need to do as a new band for an hour's set in a location like this, starting with The Who's Substitute and The Jam's In The City as well as introducing us to even more of their originals. The versatility that they demonstrate shows us two things - it confirms that their songwriting is of the level that these songs work equally well here as they did the previous night and secondly that they've got the assuredness to turn up anywhere and win over a crowd. Both will stand them in great stead.