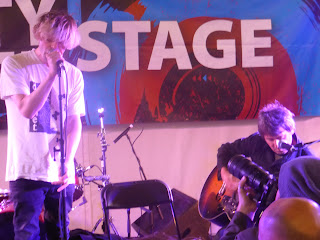 As part of this year's Manchester Food And Drink Festival, Tim and Mark from The Charlatans performed a short acoustic set in the tent on Albert Square preceded by an interview with the editor of the hosts' City Life Simon Binns.

Given this is a free event, it's an interesting crowd that's gathered, a mix of Charlatans die-hards, office workers from around the city, curious bystanders here to sample the food and beer and those attracted by the name band that's doing a free show. The event starts with an interview and it's an inauspicious start to proceedings. Firstly, the sound simply isn't loud enough to drown out the chatter as these interview events are much more suited to a seated indoor theatre, and secondly, the nature of the questioning doesn't, despite Tim and Mark's best efforts, lead to an incisive discussion of the band as you'd get with the likes of Dave Haslam or John Robb performing question master duties.

The band are introduced as an "up-and-coming local band", ironic really given that such things are an anathema to City Life as they don't generate enough click-bait or free bars, then the questioning starts with the audience being asked "who's been to a Charlatans gig?" and "who bought Different Days?"  They then attempt to run through a track-by-track view of Different Days with Tim and Mark explaining the meaning behind some of the songs that are described as "Charlatans classics" or having banging bass lines of the sort you'd find in the Madchester themed cafe that City Life are getting excited about, whilst The Charlatans, like fellow survivors of that hallowed time James, are clearly forging new paths as demonstrated by Different Days and its predecessor Modern Nature. The whole thing nearly comes to a grinding halt when Tim's asked what he thinks of the world and "what we should do more of?" but he directs the conversation back to the audience. Our friends think the interviewer is pissed, especially when he starts telling his own anecdotes about stalking Johnny Marr or when he asks the audience "who's a Dad?"

The whole thing is saved by the acoustic set at the end, although they also give us snippets of some of the songs in the middle of the interview. The four songs are split equally between two tracks from Different Days and two old favourites that are given a very different lease of life in this stripped down format with just a guitar to accompany Tim. 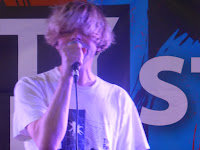 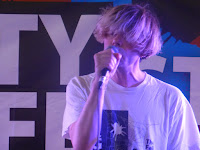 Spinning Out is possibly the stand out track on Different Days and its heartfelt could be about home and that home could be anywhere lyric "wind blows your hair, rain wets your face, keep coming back to this place" feels particular poignant in Manchester given everything that has gone on in the city recently and the band's attachment to the city (albeit none of them were born or lived here growing up) and it never loses the warmth of the original.  In the interview, Tim alluded to the fact the band's songwriting process has changed as they're now a four-piece and this also comes across in the stripped down version of Different Days where you can see the birth marks of the song revealed without the studio touches and other instruments that get applied to the final version. Tim's voice is softer and more expressive too, as if transformed by the situation.

Tim jokes about just having recovered from man-flu and being high on Lemsip and tells Mark to decide what to play next. It's a frankly stunning and quite startling take on North Country Boy that is hardly recognisable. It sounds like it's a not-too-distant relative of The Smiths' infamous and much-loved b-side Jeane and is a real revelation. Tim looks out across the crowd and picks out those who are mouthing along every word and smiles towards them, enjoying the moment of connection despite the slightly bizarre surroundings we find ourselves in.

Tellin' Stories isn't as far divorced from the original, but again it's refreshing to hear a new take on a song that's been heard live so many times and which is testament to the enduring quality of the band's songwriting over the years. There's more audience participation in this one, although a respectful intent not to drown out the still too quiet sound set-up in the square. And that's our lot, a short but very sweet last minute surprise for a Thursday night from a band that still has as many ideas and the desire to push on and challenge themselves as well as us, their audience.