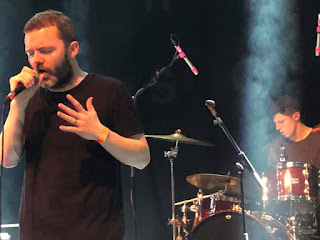 The Slow Readers Club opened up their Through The Shadows tour in Dublin at the wonderful Button Club venue revealing two new songs for the first time and mixing tracks from their self-titled debut and 2015's Cavalcade to a rapturous response from a lively Irish crowd. Support came from the young up-and-coming Limerick band Slow Riot.

We don't know a great deal about Slow Riot before their set, and that's not surprising given there's only one of their seven-song set, Trophy Wife, on line at present as the other six come from their debut album that's due out early next year. It's an impressive collection of songs though, ones that tip their hats to their quoted reference points like Gang Of Four, Television and Wire although we'd add Interpol to that list, but which impose their own four personalities into their songs. The songs feel like they're meticulously constructed for maximum impact, direct in style, but with space for them to breathe. They're accessible, wear their hearts on their sleeve and have a charm that lurks below the chiming guitars. 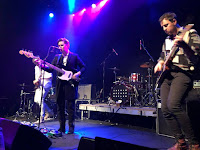 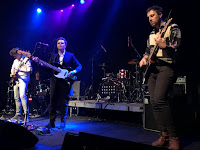 Lighthouse and Burn In The City are our two favourites of the seven, but every song has a warmth that draws you in and Niall's vocals have a rich emotional quality to them. As the set progresses you can feel the response towards them growing, a sure sign of success for any band who's picked up a support slot like this one. They leave having created a very positive impression on an audience that, like us, knew little of them beforehand. We'll definitely be keeping an eye out for the album.

We've documented the continued rise of The Slow Readers Club for quite some time now, how they've gone from playing the likes of the Night And Day Cafe in Manchester a few weeks before the launch of Cavalcade to selling out the Albert Hall two months in advance two and a half years later without management or a record deal. That's all changing now and in some respects the hardest most difficult task is ahead of them with their third record as there's now expectations, a growing fan base and the supporting structures being assembled that will mean they have to deliver a record at the very least that matches Cavalcade for its immediacy and long-lasting qualities. In addition to the two songs they debuted last year (and tonight's venue has close to double the number of people in compared to last year), new single Lunatic and Through The Shadows, there's two more new songs included tonight - a slower number called Not The Only One, which sees Aaron play keyboards and the main set closer Open Up Your Heart, which might just be the song that catapults them still further forward. 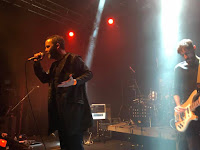 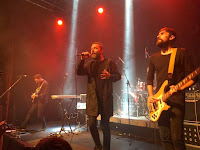 The READERS chants start up once Slow Riot have completed their set and reappear at the end of every one of the sixteen songs they play. These have become the calling card of the fan base that's growing exponentially and are one of the most dedicated around (we counted at least forty people there from the UK). They're drawn in by the glorious celebratory atmosphere that gets created at these shows. Songs with big sing-along choruses follow one after the other, like a conveyor belt and whilst there's a range of different styles and approaches at play here, that basic genesis of a Slow Readers Club is consistent. It feels like they're on a roll too, buoyed by the success of the recording sessions for album three and by the thunderous response from the Dublin crowd, which seems to get louder at the end of each every song. As Aaron sings Start Again, there's almost an echo as the crowd sing back the staccato chorus and impersonate the clock movement with his arms that accompanies the "time will come to take its toll" line.

New single Lunatic is even more glorious live, six hundred sets of hands raised in unison as it reaches the breakdown and around half the crowd already know every single word. Not The Only One has replaced Days Like This Will Break Your Heart as the slower song in the set and it's a thing of genuine beauty, Aaron playing live keyboard on it and also demonstrating a rich depth and real empathy to his voice that's often overlooked as people flock to the big singles. Grace Of God makes a welcome return to the set, one of the earliest Cavalcade songs that has been out of the set for a couple of years. It's welcomed back like a prodigal son and rightly so as it's got the same directness and immediate impact as the five singles from that record and it could easily have been one of them.

The first album might not have the same crisp production details as Cavalcade, but it's certainly got the songs as One More Minute, still my personal favourite although it's close, and Feet On Fire that theaten to steal the thunder. Plant The Seed is the song that first got them recognition here, being played by a now defunct local indie station which meant their first two Dublin shows were sell outs based on the word of mouth that they generated, but like all great bands, their supposed biggest songs don't stand out from the crowd because of the quality of the rest although at the end Aaron has to wait for the READERS chants to die down and have a little laugh to himself before introducing the next song. Through The Shadows confirms our earlier thought that he's never sounded better than he does now, a voice richer and more redolent than ever before. With David controlling drums, Jim's dancing bass lines and Kurtis's lead guitar and backing vocals locking together even more than ever before, there's an incredibly tight feel to their sound without it losing any of the energy and passion of the songs. 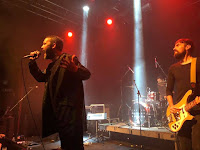 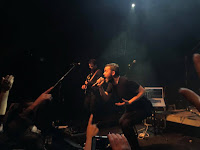 The final song of the main set is the moment though. Open Up My Heart announces itself with a soaring stadium-sized keyboard intro that comes back and a killer refrain that boldly declares "believe enough to lose control, where there's love there's always hope." It's surely going to be, unless they've got something even more powerful in their locker, the song that radio won't be able to ignore and it vanquishes any fears about whether they can deliver the third album we want them to.

The encore consists of four songs off Cavalcade, starting with the title track and then Forever In Your Debt, the real centrepiece of that record in our view and the benchmark against which the new songs need to be measured. The clapping along almost drowns out the band before Aaron even starts to sing and when it reaches the breakdown there's a surge in the volume of the singing in a communal celebration of love whilst a similar response for I Saw A Ghost feels like six hundred of us are expelling their inner demons to the song. All good things must come to an end though and Know The Day Will Come still fits the bill as the set closer as it does on the album.

When one of your favourite bands start to play or put out new material you're always worried whether it'll reach the heights of their previous work. For The Slow Readers Club there's a lot riding on the next album and they have to get it right, but on tonight's showing they've got the songs and they're getting better live, turning these dark songs into a magical celebration. With the right people behind them, they're standing on the brink of something genuinely special that's come out of an unflinching belief in what they do, against the odds for so long and a triumph for substance, laying your emotions on the line and quality over style.

Those READERS chants are about to get a whole lot louder.

The Slow Readers Club played Fool For Your Philosophy, Sirens, Start Again, Lunatic, Not The Only One, Grace Of God, One More Minute, Feet On Fire, Plant The Seed, Through The Shadows, Block Out The Sun, Open Up My Heart, Cavalcade, Forever In Your Debt, I Saw A Ghost and Know The Day Will Come.