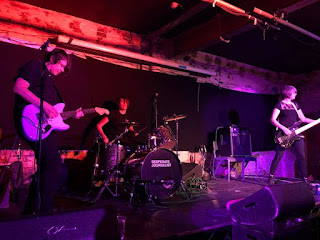 LIINES returned to Manchester for a set opening for Desperate Journalist at Soup Kitchen on Friday night. With their debut album in the bag ready for release next year, their half hour set covered most of the record with a raw, intense set that felt at home in the basement venue.

As bands play more together their sound progresses, they add things in that make the sound fuller. LIINES are doing the exact opposite. Tonight's gig is even more primal, back to the absolute basic ingredients of guitar, bass, drums and voice, delivered with a power and passion that comes with living every note, every drum beat and every single word. It's where LIINES are at their best, their music isn't about show, of flash guitar solos or arty lyrics with some sort of message. They write from the heart, they perform from it and they leave you with you feeling close to it.

They finish with Never There, the song that got them the ear of John Kennedy who's become an ardent fan and champion fan and whilst that's the most radio friendly song in their canon, it's got a whole bunch of other three minute short sharp shocks to the gut doing battle alongside it. Be Here, Disappear, Find Something and Never Wanted This are songs that pull no punches and you can see in the way Zoe on guitar and Leila on drums throw themselves into everything they do that these are songs from the heart, from things they've lived through rather than some glib shiny pop song about bubblegum and love. New recruit Tamsin on bass oozes studied cool and it feels like she's been there for a long time already and was possibly the only real possible replacement for the departed Steph.

LIINES are still here, still fighting and they've got a record to come and batter their way into your heart and mind in 2018.