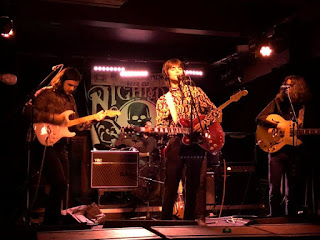 The Big Peach are one of our favourite new discoveries of 2017. Unashamedly declaring that they want to bring “rock and roll to the masses” at the start of their Night And Day set, they’re on course to do just that.

They start with Give Up Askin’, the lead track off their recent self-titled EP, a raucous shuffle laden with harmonica and a hook line that causes involuntary foot tapping around the room. And that’s where The Big Peach’s magic lies. Unerringly familiar, but also laced with a unique combination of rock and roll flavours, The Big Peach make you feel like you know all their songs even though you might be hearing them for the first time and by the final chorus you’re singing along.

Politician might be a song about politics, but it’s not red or blue, it’s a statement of how none of them really are interested in you and I and how they do what they tell you not to. It’s not a protest song, but it makes its point.

The five-piece look, feel and sound like an accomplished unit already despite only being a dozen or so shows in. Watching them live you can see the genesis of the stand up and play open mic nights where they’ve learned their trade in how comfortably they gel and how easy they make this look. Game We Play and Free N Easy are so damn effortlessly simple in their execution, but uplifting, infectious and fun in their delivery that this feels like it’s the most natural thing in the world for them.

And that’s why they get such an ecstatic reaction at the end. They might not be playing to huge crowds at the moment, but what bands do when they start off? The key is everyone in the room, including those who have never heard of them before, get them.